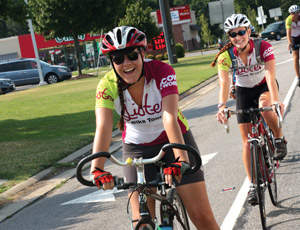 DR Congo: Over the course of their 1,900 mile journey, cyclists in the 2012 Sister Tour spoke to more than 3,000 people about ABS's She's My Sister Program. Photo courtesy of She's My Sister.

American Bible Society's She's My Sister™ program will launch two summer bike tours to raise funds for victims of rape in the Democratic Republic of the Congo (DRC). The first bike tour will begin on May 30 in Daytona Beach, Fla., and end on June 9 in Cleveland, Tenn. The second tour will begin on June 14 in Grand Rapids, Mich., and end in Milwaukee on June 23.

She's My Sister provides Scripture-based trauma healing to victims of rape in areas of the DRC that have been devastated by conflict and political instability.

In 2012, eight cyclists from the Sister Tour traveled more than 1,900 miles through nine states to speak to more than 3,000 people about the She's My Sister program.

For more information on the 2013 Sister Tours visit MySisterTour.org or contact Amanda Olsavsky at AOlsavsky@AmericanBible.org.

The Bible Society of India opened the doors of the new Shillong Translation Center building in September 2012. The center will serve as the hub of Bible translation for the 8 million Christians in Northeast India.

The need for translation in this region is great: Northeast India is home to 250 tribes who all speak different dialects. Currently, the Shillong Translation Center works with half of all 79 ongoing translations in India.

The opening ceremony included the inauguration of Dr. Along Jamir as the new associate director of translations for the Bible Society of India. Dr. Jamir emphasized the importance of working with local churches to effectively spread God's Word throughout India. Representatives from all major church denominations were present for the opening ceremonies.

Although English is the official language of Jamaica, most Jamaicans speak Jamaican Patois. Until the launch of the New Testament in Patois, Jamaicans only had access to the Bible in standard English translations. Now, for the first time, many can read or listen to it in the language they use in daily conversations.

The Rev. Courtney Stewart, general secretary of the regional Bible Society, explained that there is a widespread conviction that Scripture is best understood in a person's spoken tongue. For many Jamaicans, this language is Patois.

The idea of translating the Bible into Jamaican Patois came from Ms. Faith Linton in the 1950s. Ms. Linton, now 81, is a longtime board member of the Bible Society of the West Indies.

Hubert Devonish, a Patois expert and linguist who is coordinator of the Jamaican Language Unit at the University of the West Indies, considered the Bible translation a big step toward getting the state to eventually embrace the Creole language.

Growing the Church through Satellite Television

ABS and other Bible Societies in the Middle East and North Africa are teaming up with SAT-7, a Christian satellite television station, to serve the growing Church in the region through widely accessible and culturally appropriate learning opportunities. With an estimated reach of 15 million viewers, SAT-7 is strategically placed to deliver theological education via satellite television and a growing leadership network via the Internet. Using multimedia instructional technology produced and delivered by nationals, believers in the region will be taught on course topics such as The Bible, The Christian Life, Leadership and Ministry Skills, Society and the Church.

Hope in the Belly of the Earth

God's Word to the Chilean Miners

In biblical times, lepers were considered unclean and unworthy of human touch. Women who...