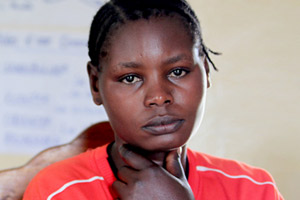 Mukeshimana is 20 years old. When the war came, she fled and tried to hide in the bush. But eight ruthless soldiers pursued, trapped and raped her. As a result of the assault, Mukeshimana lost the ability to control her bladder, causing her distress, shame and isolation. Her relatives now shun her.

Doctors in Goma tried to repair Mukeshimana's problem. But after 10 surgeries, she still suffers the effects of her condition. She lives with deep emotional, psychological and physical pain. Her story is not uncommon in the Democratic Republic of the Congo (DRC).

In March of 2011, representatives from American Bible Society and the Bible Society of the Democratic Republic of the Congo convened in the DRC to train local community leaders in trauma healing workships, an effort to help heal a damaged culture.

War has ravaged the people of DRC for 13 years. Armed militias use rape as a weapon against innocent women and children — a tactic aimed to destroy the entire society. In the DRC, men often reject their wives when they are raped. The supposed shame that comes from a defiled wife is viewed as a blemish on her honor, and the fabric of the family unravels. The trauma and pain caused by these evil acts is widespread, and the women of the Congo are left broken with no way of putting the pieces back together.

Mukeshimana found herself in this hopeless situation, but her tragedy is not the end of the story. With the help the Bible Society of the DRC, American Bible Society launched the She's My Sister™ initiative to bring healing and restoration to women broken by rape and abuse.

In March, representatives from American Bible Society traveled to the DRC to participate in trauma healing training. Teachers, pastors, pastors' wives, medical workers and community leaders were taught to lead trauma healing workshops, using the Scriptures as a base.

Over the span of two weeks, people from four different language groups translated six Bible stories into their languages, including the creation and the fall, the road to Emmaus, Lamentations, the story of Job, the resurrection of Lazarus, and the Parable of the Unforgiving Servant. They also translated six contemporary stories of trauma about suffering, healing, grieving and forgiveness into their languages. By telling these stories to groups and discussing them, they can lead people through a trauma healing process. The stories were taught in French, the official language of the DRC.

ABS's Harriet Hill is an expert in trauma healing and is co-author of Healing the Wounds of Trauma: How the Church Can Help. She facilitated dialogue among candidates and teachers to address the stories' deep-seated issues.

“By talking through these different stories, we were drawn in and attempted to view our own life story in this biblical context,” says Hill. “Through healing workshops, we learn the biblical concepts of forgiveness and reconciliation and offered hope through Christ.”

The workshops are designed to foster healing not only for women  but for the entire culture as well. In the DRC, men often reject their wives if they are raped. If the woman sustains an injury, as Mukeshimana did, the physical trauma further alienates her from society. Most are rejected and spurned. This despicable behavior is the source of great pain for a woman who has suffered abuse; it has lasting effects on her emotions and ability to heal.

At the training sessions, local men were convicted by Scripture and came forward to apologize for the incredible pain they've caused the women. This was a powerful, symbolic first step in mending a community within a culture built on shame and hurt.

But the trauma continues. During the two-week training sessions, 10 villages were burned by rebel militias. Explaining the continual oppression and violence, Hill states, “The militia is in the forest, disease is in the camps, the people have no means."

The people of the DRC are finding hope and healing in the face of unthinkable tragedy. Even in the bleakest of circumstances, they're discovering new life through God's Word. Through these trauma healing sessions, the local community is rising up and surrounding the broken people of the DRC with the loving arms of Christ.