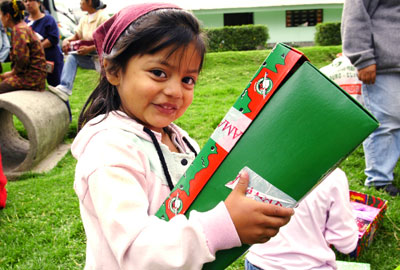 After years of watching her parents argue, Angela felt helpless and angry. She wanted peace to return to their home, though she feared that peace would never come.

This was when a friend invited her to attend a special service at church. Angela invited her parents to accompany her. They were reluctant at first, but agreed to go when they realized how much this meant to Angela. She was thrilled!

Her joy was multiplied when Operation Christmas Child (OCC) shoe box gifts were handed out to children at the church, gifts for her and her friend. It was hard for Angela to imagine that people whom she had never met would prepare such a beautiful assortment of gifts for her.

As part of the service, the pastor invited those in attendance to make a decision to follow the Lord Jesus Christ. "What happened was something very beautiful that I will never forget," said Angela. "I felt my hand going up to receive Christ. I knew I needed him."

It is a joy to partner with Samaritan's Purse and Operation Christmas Child, providing God's Word for children like Angela all across the globe. The Operation Christmas Child (OCC) shoe box ministry began in 1993. Since then, OCC has organized the shipping and delivery of 61 million gift-filled shoe boxes to children around the world. Franklin Graham, who directs this ministry, believes that through a simple gift — a new toothbrush, toothpaste, a stuffed animal, baseball and cap, doll — the child will come to know the giver, the Lord Jesus Christ.

Upon receiving a shoe box — through a community church — many of the children are given the opportunity to begin a correspondence Bible study with the Mailbox Club®, a ministry to children of all ages in 100 languages. 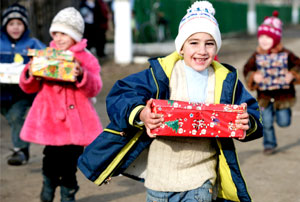 Since partnering with Samaritan's Purse, the American Bible Society has made 1.2 million New Testaments available to children within Operation Christmas Child programs around the world. (Photo courtesy of Samaritan's Purse.)

In 2004, when the OCC focused its ministry toward evangelism that leads to discipleship, they invited the American Bible Society to join the partnership. Since then, children who have completed the 10 lessons of the Bible study receive their own New Testament for children in their own language.

Since joining the partnership, ABS has provided 1.2 million New Testaments for children, and is committed to continuing to do so in years to come.

This year, ABS's role is becoming increasingly important in helping fulfill the OCC discipleship vision, in the development of a new, illustrated children's Scripture product to be distributed globally.

But more than children are benefiting. After Angela discovered the love of Christ, her parents raised their hands to receive Jesus as Savior, too. "The greatest gift was to see my parents sit together that day and hear the Word of God, and for all of us to receive Christ," she said. "Later the pastor counseled them, and now we are all attending church!"

Please pray with us for the continued expansion of this exciting Bible outreach ministry. In the next two years ABS New Testaments will be given to children completing the Bible study in India, the Dominican Republic, Nicaragua and Ecuador.

"We know that God is always at work for the good of everyone who loves him. They are the ones God has chosen for his purpose . . ." Romans 8:28 (CEV)

The Celebration of a Generation

The Datooga of Tanzania Rejoice Over God’s Word

“I have hidden your word in my heart so that I won't sin against you.”...