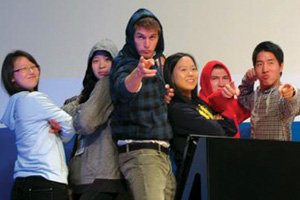 Youth Assembly delegates expressed themselves through drama at the UBS World Assembly in Seoul. Photo by Daud Soesilo.

The eighth United Bible Societies World Assembly was held in September in South Korea. It was the occasion to welcome the Rev. Dr. Robert Cunville as the new UBS President, who will serve until the next World Assembly gathering in Brazil 2016.

According to United Nations statistics, half the world's population is under 25, and that demographic was reflected at this event. Twenty International Youth Assembly delegates representing 17 countries, and another 20 from the host country, were on hand to provide their perspective.

Eleven-year-old Idriss Segney reading an illustrated Bible donated by the Bible Society of Cameroon to...

Members of the Chikunda translation team in prayer. The New Testament was released in 2009 and...