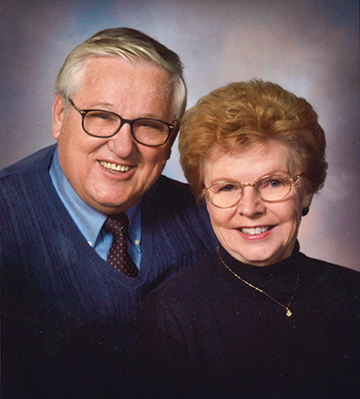 For more than 25 years, Lucille Sapp shared God’s Word with female inmates in the Douglas County Correctional Center in Omaha, Neb. As a member of the Gideons Auxiliary, she would travel 60 miles round trip several times a month to deliver copies of the New Testament, offer Bible study, sing songs and pray with the women.

“We also had them write prayers in a book that we could take home and pray for them during the week,” Lucille says. “It was just heartbreaking to hear their prayers. Many were good girls who just went astray and got into trouble. So many of them found the Lord in jail and prayed to straighten out their lives when they got out.”

Although she had to discontinue her trips to the jail because of the physical demands of the visits, Lucille and her husband Bill continue their prison ministry work through donations to American Bible Society. They have funded a massive Bible portion project that involves a key jail ministry partner, American Rehabilitation Ministry (ARM), in Joplin, Mo.

Through their donation, 1 million copies of the Gospel of St. John will be distributed via ARM to 3,500 U.S. prisons. The Scripture Portions, which include English and Spanish versions, also feature four pages written by prisoners, discussing the key messages in John’s Gospel and a sinner’s prayer.

“For a person who has never read Scripture, the Book of John is a good one to introduce them to the Lord and get them started,” Lucille says. “The other books can be more difficult to understand, especially the Old Testament.”

The Sapps see this as a way to share the blessings God has given them. Bill, the son of sharecroppers, and three of his brothers opened their first truck stop. Today, Sapp Bros. operates 16 travel centers from Pennsylvania to Utah and is the largest petroleum marketer and propane distributor in Nebraska. Lucille and Bill credit family and faith for putting them in the position to give back to society in a meaningful, Christ-centered way. Through their generosity, they have seen firsthand the ability of God’s Word to heal hearts and rebuild lives.

God’s blessing poured forth on the Sapps’ stewardship of the project. Just one week after funding half of the venture’s cost, the Lord blessed them with extra, unexpected resources that allowed them to finance the entire program. In addition to supplying the Scriptures, they have now financed all costs for postage and shipping to transport God’s Word to thousands of prisoners around the country.

Thanks to the Sapps’ gift to American Bible Society, potentially 1 million of the 2.3 million inmates in the United States will encounter God’s healing Word. Lucille finds the opportunity to touch so many broken hearts with Scripture “overwhelming.”

You can support the work of American Bible Society around the world too! Visit:  Gift.AmericanBible.org.

LAOS - After 10 years of careful and consistent ministry in Laos, the prayers of God's...

Photo courtesy of John MathewsCertain images from my ministry trip to China have imprinted...