How One Woman's Pain Made Way for Others to Heal 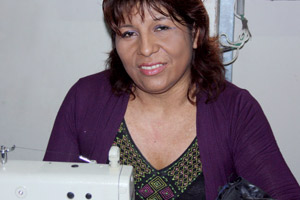 Elizabeth Alanya seated at her sewing machine in her workroom at home in Lima. The machine was a gift from Alan García — president of Peru until July 2011 — after he heard about her case. Photo by Liz Smith.

It's been 20 months since Elizabeth Alanya's boyfriend threw boiling water at her face and body, disfiguring her physically and causing undue emotional pain. After several operations, she is healing nicely now. The Peruvian Bible Society (PBS) was instrumental in helping her in several ways. And God is using Elizabeth to shine a light in dark places where others still suffer from domestic violence.

Four out of 10 women are victims of domestic violence in Peru. In Lima, where Elizabeth was injured, the topic is getting media attention in part because of this case. The way things were handled initially added to her injury. Elizabeth was sent home from the hospital prematurely only to return even worse.

The general secretary of the Peruvian Bible Society, Roberto Miranda, is also a practicing lawyer and his firm has taken on pro bono cases including Elizabeth's to help stem this problem. Initially Elizabeth's sister approached Roberto for help. When he went to visit Elizabeth in the hospital, he said, “I had to cover myself so I wouldn't infect her just by being near her. I have a heart for justice and defending her was a natural platform for PBS, combining my legal expertise and passion for justice.”

Elizabeth's face was so disfigured that she was not allowed to show it on television, but she was willing to let her story be publicized to urge others to report their injuries. Now she is a virtual poster-child for “stopping the violence.” PBS is also using social media to get the word out in as many ways as are available.

On a Monday in March, PBS and American Bible Society staff watched as she spoke in front of a very poor but packed church community in Lima, wearing make-up to cover the scarring and protect her skin from the sun. Her talk was followed by a training session led by Samuel Asenjo, a PBS staff member a seminary graduate who has a heart for holistic Bible work. Those who complete his seven-week program receive a certificate, but more important they have acquired tools to recognize abuse and combat it.  In Lima, there are more than 2,000 different churches, and PBS is working with all of them. To date, more than 10,000 people have been trained.

Elizabeth Alanya's case changed the way PBS wanted to approach their work and it changed the law.  The Peruvian Bible Society now sees the value of a holistic approach to healing the whole person. They have seen the value in helping people to see their issues through the healing lens of God's Word in the company of other Christians.

On Dec. 27, 2011, the law changed in Peru so that now there are real consequences for the perpetrators of domestic violence. The man who injured Elizabeth is in jail for the next eight years. His is the first case to receive a prison sentence.

Roberto Miranda says, “We are so grateful for American Bible Society's support for this important way to bring God's healing Word into the hearts of hurting people.”

To view this photo slideshow you need to have Flash Player 9 or newer installed and...

Pray Around the World: Focus on Europe