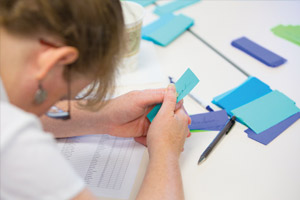 American Bible Society staff members set aside time to pray for our donors' concerns. Names were noted on slips of paper, prayed for and gathered into glass jars

Our donors pray for American Bible Society's ministries and American Bible Society prays for its donors. On July 25, some 30 staff members lifted up the requests of thousands of donors who asked for prayer. The needs included prayers for health, finances and relationships. On one day, we prayed by name for 7,000 of our treasured donors.

The author, Dave Sanders, D.Min., writes, “The site provides biblically based content that engages both [the] teen and military cultures, and offers Scriptural correlations to their lives that show how real people have learned to deal with similar issues and trauma. ABS continues to do all it can to reach the entire military family with God's Word.”

A Divided America and The Presidential Election

49% of Americans are likely to vote for a presidential candidate who uses the Bible for personal guidance and public decisions.

51% of Americans are not likely to vote for a presidential candidate who uses the Bible for personal guidance and public decisions.

45% of Americans say their faith influences their views on political issues.

55% of Americans say their faith has little or no influence on their views on political issues.

This summer, eight students from across the United States joined the staff at Valley Forge, Pa., for 10 weeks as interns for American Bible Society. They all worked with great passion, using their gifts to help further the mission of ABS. We were sad to see them go, but enjoyed them immensely while they were here.

For many years, ABS has provided Scriptures to Chinese in China primarily by subsidizing the paper on which Bibles are printed inside China. Now, ABS has established a Chinese Advisory Council to develop its outreach to Chinese believers in the United States.

The Council met for the first time in June at ABS's headquarters in New York under the leadership of Council Chairman Rev. David Hsu of Houston. Its members represent the diverse Chinese community and its varying Christian worship traditions. This Council marks the first step in the launch of a Chinese language ministry to serve the spiritual needs of this large community, and is an outgrowth of the larger Multi-Language Ministries initiative at ABS.

Advocates on the Road

Friends of ABS joined the 2012 bike tour in an effort to get the She's My SisterTM message out.

These cumulative efforts helped to raise awareness and funds to enroll more than 3,697 women living in the Lord's Resistance Army-affected area of Banda, DRC, in Scripture-based trauma healing programs.

In the Aftermath of Abuse, One Woman Found Peace in God’s Word

How a trauma survivor clung to Scripture for hope and healing