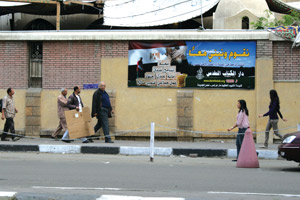 A Bible Society of Egypt banner on a church building in Cairo urges the adoption of biblical values in the reconstruction following February's Revolution. The Society has placed 230 such banners on church buildings across the country.

Unprecedented days in the Arab world are providing the Bible Society of Egypt a means to shine God's light. In a newsletter sent to supporters this past June, Ramez Atallah, the general secretary of the Bible Society of Egpyt, was surprisingly upbeat. He said that one unintended result of the popular uprising that led President Mubarak to step down in February is that people in nearly every sector of society are now seeing opportunities like never before.

“Students challenge their teachers or educational administrators, employees challenge their bosses, ordinary citizens challenge civil authorities, there is little respect for the police,” he said, “and even the respected and formerly-feared Army is now being challenged.

The many acts of violence, burning of churches, shops, and factories — not to mention the spate of kidnappings for ransom and increased petty theft — are partly the result of a misunderstanding of freedom and a lack of fear towards anyone to whom these people could be held accountable.”

In the past, he added, such acts would have been inconceivable. But now they are frequent occurrences.

“Two men who plotted to assassinate President Sadat in 1981 have been released from jail and  are now popular talk show guests,” he said.

New Opportunities for Bible Ministry
The Bible Society found new opportunities for spreading God's Word in response to the Revolution. They placed Scripture advertisements in all Egypt's major newspapers, hung 230 banners on church buildings all over the country, put billboard messages beside major roads and ran an advertisement on a large digital billboard in the heart of Cairo. All carried the headline ‘Rise and Rebuild Together' and listed biblical values as the building blocks needed in the reconstruction effort. They also promoted the Bible Society, its website and its home-delivery hotline. The Society is also engaged in producing a television advertising campaign, and a number of short videos have been produced and are to be published soon on Youtube and Facebook.

Soldiers and tanks
Meanwhile, a Bible Society distributor has been busy in Imbaba, the Cairo district where a dozen people were killed and 200 were injured in May after churches were set on fire. He recently visited six churches — including the three that were attacked.

Since the attacks, the area and the churches have been guarded by soldiers and tanks. In the words of Lois Nagieb, a member of the Society's Communications Department, “One cannot simply drive in and begin to distribute things.”

Hany, one of 23 full-time Bible Society Sales and Church Relations representatives, was in Imbaba to distribute an audio Scripture CD, developed specially for the Christians of the district, called Be Strong and Courageous. In order to avoid being interrogated by soldiers, once his car was parked, Hany would walk to the church carrying just a single, sample CD, and meet the priest in order to obtain his blessing on it and permission to distribute it.

Comfort for victims' families
Having then determined the number of CDs that the church needed, he would walk back to the car — in company with a priest as a further precaution. The churches were then provided with the Scripture CDs to distribute to their congregations. He also delivered a consignment of a hundred new Bibles for the congregation of a church that had been completely destroyed by fire. The Bible Society also hosted a meeting for the families of the victims of the violence in Imbaba and their church leaders, showing them continuing support, encouragement and comfort and provided them with a special Scripture gift, for which they were deeply appreciative.

The society plans to give groups of children from churches affected by the violence a tour of the Bible World exhibition at Bible House, and, in partnership with local Church leaders, give a thousand families each a packet of Scripture products and a basket of food.

Now is the time for Bibles in the Middle East »