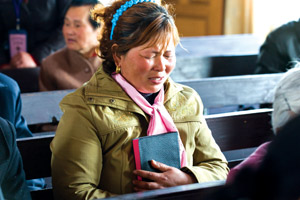 A woman weeps after receiving her first Bible during a visit to Shang Dang village church by China's first Bible and medical van. (Photo courtesy of Norwegian Bible Society/Dag Smemo)

Mrs. Chen is one of about 300 people who benefited from the debut journey in 2010 of China's first Bible and medical van, which has been deployed in Jiangsu Province. Some 300 Bibles were distributed and about 70 people received basic medical care during the van's visit to Shang Dang village, just an hour's drive from Nanjing, the provincial capital.

The village church, set amid fragrant fields of yellow rapeseed, was decorated with pink balloons and colorful flags in celebration of the van's visit. As it arrived, the church band began playing, and members of the congregation came out to welcome the two volunteer doctors and a group of visitors. They also helped to unload the boxes of Bibles and medical equipment.

After a short worship service, preacher Qiao Hong, 46, announced that the Bibles would be distributed to everyone who wanted one.

“These Bibles are given to us by friends from different countries who have a mission in this world to share the Word of God,” she told them. “As Chinese Christians, we want and cherish the Word of God.”

As the Bibles were given out, people immediately opened them and started reading. Some held their new Bibles to their chests, closed their eyes and prayed silently and tearfully.

Fifty-five-year-old Qiu Chang Lai was particularly delighted with her copy. “Have you seen my old Bible?” she asked. “It's falling apart and I've had to sew it together! I've been wanting a new one for some time, so I am very excited to get this new Bible today.” 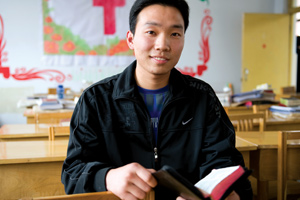 Mrs. Chen Guo Zi, 80, receives her first Bible after having been a Christian for 14 years. Photo courtesy of Norwegian Bible Society/Dag Smemo

The Church in China

During a visit in February to American Bible Society, the Chairman of the National Committee of the Three-Self Patriotic Movement (TSPM) of the Protestant Churches in China, Elder Fu Xianwei, spoke passionately about the medical van program.

He said, “It plays a very important role in daily church life and proclaiming the Bible. Rural areas are difficult to travel to; it is not easy for those people to get Bibles and medical services. So we combined these needs.”

Elder Fu added, “A lot of local Christians think that they will never get sick if they pray. If they stay home and live by faith, they will stay healthy. Sometimes this means small problems become big problems. When you are sick, you must take medicine.”

The local government supports this and understands that the medical van is bringing spiritual food and medical service that equals preventative medicine.

Elder Fu also said that there are now 23 million Protestants in China, and the number is increasing daily. He hopes that with the support of American Bible Society, the medical van program will eventually include 12 vans.

Like many people in this area, Mrs. Qiu struggles to make ends meet. Her husband died seven years ago and she does not have a job, so she spends much of her time praying and sharing her faith with others. She has been suffering with pain and a swollen neck and was one of the first people to join the long line to be seen by the doctors in a small room at the back of the church.

Dr. Li Xiao Fei, 36, examined her and did various tests using the equipment from the van.

“The tests showed that my heart is fine,” said Mrs. Qiu afterwards. “But I now know that I have a problem with my thyroid and need to seek treatment for it.”

Another patient, Rong Yao Mei, 63, was anxious about her heart, which she said had been beating too fast. She was examined by Dr. Hong Bi Hua, 71, who is retired.

“Your blood pressure is 200 over 104, which is far too high,” Dr. Hong told her. Confirming that Mrs. Rong had access to the correct medication, she told her to start taking two pills regularly. “This will lower your blood pressure and you will start feeling much better,” she advised. 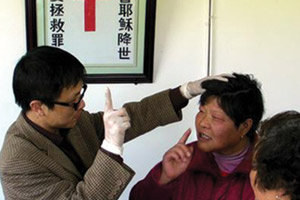 “We saw about 70 patients with problems similar to Mrs. Rong's,” Dr. Hong said later. “. . . Problems like high blood pressure, dizziness, headaches and problems associated with old age, such as arthritis. The equipment we have is very useful in helping us diagnose problems and give good advice.”

Although the doctors who work at the medical van cannot offer comprehensive medical treatment or supply medicine, they can give patients an accurate diagnosis of their condition, prescribe medication and advise them how to seek appropriate treatment. For instance, when Dr. Li used the ultrasound scanner on one man, he discovered signs of a growth on his liver. Suspecting cancer, he advised him to go to a hospital as soon as possible — advice that could help save or prolong his life.

“People in rural areas get very little medical help,” said Dr. Li, who himself comes from an underprivileged background. “Most of the medical resources and services in China are based in cities, and many rural people are so poor that they cannot afford to travel to see a doctor or pay for medical advice. Seeing a doctor is a luxury for them. I want to help them because I know what it is like to be poor.”

“Christians in rural areas have been asking us to bring them medical help when our Bible distribution van goes to the villages, because it is difficult for them to see doctors,” said the Rev. An Xinyi, chairman of the Committee of the TSPM in Jiangsu Province.

“So, with funding from the Bible Societies, we have gone ahead and bought this van and medical equipment. There are Christian doctors who are willing to volunteer their time and skills. We have bought things like blood pressure kits, an ultrasound scanner and an ECG machine.”

Most Chinese Christians live in rural areas of China and have little access to personal Bibles. | Read Now »

Jiangsu's Bible and medical van is the first of up to 12 that the China Christian Council/TSPM and UBS hopes to roll out in different provinces. “We are so grateful to American Bible Society for your support and subsidy of Bible paper. That is very meaningful, especially for the rural areas in making it possible to give away Bibles,” concluded Elder Fu at his visit to ABS in February.

These are leaders who were recently trained and now conduct local trauma healing workshops in...