The Hunger of India’s Orphans 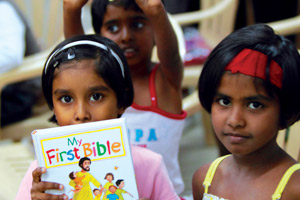 These girls live in Reaching Hand Orphanage. They just received a Bible from ABS after having been asked what they wanted first, “chocolate, Bibles or sweaters?” “Bibles!” was their reply. (Photo by Michael Gibeault)

Christmas came early for some of India's orphaned children, who were recipients of children's Bibles distributed by Bible Society of India (BSI) and supported by American Bible Society. Even the tiniest children were delighted to receive their Bibles. Lucy Barnes, wife of American Bible Society Executive Vice President the Rev. Simon Barnes, recalls being in the infant room in one of the orphanages and playing with a little girl about 18 months old. “She did not want to play with the cup and saucer and the teapot that I was trying to play with,” Lucy said, but then someone asked her if she would like her Bible. “Her face just lit up . . .  she was just riveted. It was hers, and she knew it was precious.”

In early December, Simon and Lucy traveled to India with Bible Society colleague Michael Gibeault to partner with BSI and visit orphanages, distribute Bibles to the children and witness firsthand the love of Christ in action to the least of these in India. With a population of more than 1 billion, India is currently the world's largest democracy. Yet, despite growth as a rising economic power, the country remains troubled by extreme poverty, vestiges of the caste system, and 25.7 million orphaned or abandoned children, many of whom are infected with HIV/AIDS.

While visiting the orphanages, the team distributed gifts of candy and sweaters to the children, along with the Bibles. “We don't think of India as being a cold country,” Simon points out, “but parts of India are very cold. And they wouldn't have the resources to buy a sweater.” It wasn't the sweaters, though, that captivated the children's attention.

“Invariably, if we asked them what they would like to have first, it was always the Bible,” says Simon.

The hunger these children have for Scripture is palpable. “If you point to a story in the picture Bible, they'll tell you what it is,” Michael says. One 4-year-old girl had memorized 32 of the Psalms and gave a recitation to the team. “You couldn't stop her,” says Simon. “There is this incredible hunger there.

“You see the importance of giving Bibles to these children,” he affirms, recalling a young orphan he met who was dying as a result of HIV/AIDS. “What struck me with this little girl was her incredible Christian assurance. She wasn't frightened . . . she knew where she was going.  She knew that Jesus loved her, and that she was going to be in heaven with him.”

This special edition Bible with wooden cover was made to commemorate the 100 millionth Bible printed...

I look to the mountains; where will my help come from? My help will come...

Fun with the Bible