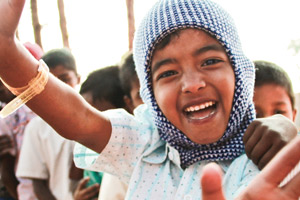 Siya Ram Yadav knew how to sing but knew nothing about Jesus. A Bhojpuri language speaker from Uttar Pradesh, India, he was asked by a member of the Bible Society of India (BSI) to record songs about the life of Christ in Bhojpuri. While singing these songs, Yadav says, “I came to know about this person Jesus Christ.” This newfound knowledge led him to start reading the Bible, and now he and his family are professing Christians. “I have left the old living style,” Yadav asserts. “Now I am a different man. Whenever I get a chance, I sing for Jesus in the villages.”

Stories like Yadev's are evidence of God's work taking place in India through the efforts of BSI. With a population of nearly 1.2 billion people, India is currently the second-most populous country on earth. Although Christians make up only 2.3 percent of India's total population — 80 percent are Hindu, and 13 percent are Muslim — that still equates to 24 million Christians living in India.

Christianity is not a new religion in the region; Thomas the Apostle (otherwise known as “Doubting Thomas”) is credited with bringing the Good News to India nearly 2,000 years ago, in A.D. 52. Yet Indian Christians continue to face unique challenges, due to cultural influences of Hinduism, remnants of the caste system and the effects of extreme poverty. Together with support from BSI donors and American Bible Society donors, the Bible Society of India is striving to address these challenges. Headquartered in Bangalore, with 15 auxiliary offices throughout the country, BSI's mission is to bring the Scriptures and the saving message of Jesus Christ to India.

India is one of the most linguistically diverse countries in the world. As such, the 24 million Christians in India represent myriad languages and dialects. Seventeen principal languages comprise the bulk of what is spoken, but according to the Indian government, the total number of languages and dialects is more than 1,600. For many believers, their native language may be the only language they speak.

BSI is working to ensure every person in India can know the redeeming love of God through access to a Bible in his or her heart language. At present, BSI produces Bibles or Bible Portions, audio Bibles, braille Bibles, and specialized Bibles for children or beginning adult readers in 175 languages and dialects. This is no small feat. In cooperation with the Indian church, BSI's 200-year-old Translations Centre oversees the translation, production and distribution of Scriptures to help meet the needs of the various people groups in India. Since 2007, the Translations Centre has completed 47 new translations for languages that previously had no Scripture. An estimated 300 additional translations are needed to help ensure that everyone in India has access to the Bible.

The Rev. Dr. Mani Chacko, general secretary of the Bible Society of India, says high quality Scripture translations are an overarching goal of BSI. “Many [others] are engaged in making a huge margin out of translation and sales of the Bible,” Chacko says, which in turn leads to issues of credibility in the translations. As part of the remedy, BSI is unwavering in its insistence that Bible translations be accurate. Paratext is a Scripture translation software that provides “exegetical, historical, cultural and linguistic information on the books of the Bible,” all in an easy-to-use format that allows translators to achieve the highest possible accuracy, says Director of Translations, the Rev. Dr. Jonadob Nathaniel. 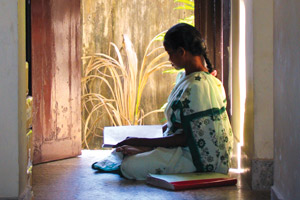 A young woman reading braille; she is being cared for and trained by an organization called Mission to the Blind in Chennai, India.

As a part of its translation efforts, BSI also seeks to make the Bible available to India's blind population. Twenty-five percent of the world's blind population lives in India, where treatable visual impairments often lead to blindness due to a scarcity of proper optometry care. Braille Bibles are a necessity to facilitate the spread of the Gospel among the blind and visually disabled, but braille is expensive to produce. The raised patterns of dots must be embossed on special paper, which is more expensive than standard paper and requires special braille machines in order to print.

Additionally, braille characters take up more space on the page than visual characters, reducing the amount of text that can fit on a page. A complete braille Bible can run into several volumes and is costly and time-consuming to produce.

But BSI is committed to bringing Christ's light to those lost in darkness. Mr. Mark from Madurai, Tamil Nadu, is someone who has benefited from BSI's braille Bible production. Born into a Hindu family, Mark lost his sight in an accident when he was a child and was eventually abandoned by his family. He was taken in by a Catholic nun and through her, learned the life-changing message of Jesus Christ.

Mark longed to read the message of the Gospel for himself and approached several Christians asking for their help. When he contacted BSI, staff was able to help him. Receiving his braille Bible left Mark with tears of joy as he began to read and memorize God's holy Word for himself. “I have no words to express my great joy on reading the Bible in braille,” Mark says. “I praise God for making [this] available to me, and I know the sacrificial labor that has gone into it. May God bless your wonderful ministry for people like me.” 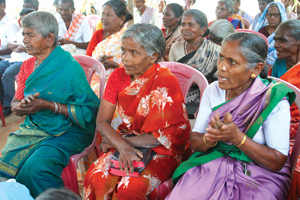 Residents of the Leprosy Patients Welfare Society worship with visitors from the Bible Society of India and American Bible Society.

Another disenfranchised people group BSI seeks to serve is lepers. Although often thought of as an “Old Testament disease,” leprosy continues to be a very real problem in modern India. Because the caste system dictated that lepers were “untouchables,” the only nongovernmental organizations currently serving lepers in India are run by Christians.

As with braille Bibles, Bibles for those with leprosy must also be printed on special paper, as the crippling effects of the disease leave many without the dexterity needed to turn a page of standard thickness. This requirement, in turn, makes the Bibles more expensive to produce.

But the need of those afflicted with leprosy to hear God's Word is great.

Mr. R. Prabakaran was working as an accountant in the city of Mumbai when he was diagnosed with leprosy. Prabakaran is a Hindu from a conservative family, and his relatives deserted him when they learned of his diagnosis. Unable to find refuge in a state-run leprosy hospital as he was too “healthy-looking,” Prabakaran lost his job, fell into a depression and ended up begging on the streets for six years.

In 1994, Prabakaran saw the emblem of a cross over a Christian church and decided to try praying to the Christian God. “If you are true and real, God,” Prabakaran prayed, “speak to the hearts of the government officials to admit me in the leprosy home and undergo a proper treatment.” To his amazement, the next time he visited a leprosy facility, he was admitted without question. Prabakaran began receiving treatment for his leprosy and dedicated his life to Christ.

Now, Prabakaran serves as secretary of the Leprosy Patients Welfare Society, where he works with others suffering from leprosy and brings them the message of the Gospel. “I am not afraid to die,” Prabakaran says. “Jesus is with me. And he always answers my prayers and meets my needs.”

“People at times give us food and clothing, but what we need very much are the Bibles,” Prabakaran says. “Thank you so much for the Scriptures.”

Bichitrananda Rout, known to his friends as Nanda, has been redeemed through the power of the Gospel. Nanda hails from Orissa, in Eastern India, an area known for violence against Christians. Nanda's family was “a very strong, traditional Hindu family,” he says, and he grew up performing pooja, chanting slokas and sacrificing animals.

“I was stubborn, arrogant and proud,” Nanda says. He was seeking a peace that eluded him. He even “resorted to black magic,” but black magic did not bring Nanda peace.

Then, in 2002, Nanda's wife became interested in learning about Christianity through the outreach work of a local evangelist. Many Christians came to Nanda's home, and prayed for him and his wife. Through their prayers, Nanda came to know Jesus and, despite opposition from his relatives, “I accepted Christ as my personal savior,” he says.

Nanda now works for the Bible Society of India, helping to distribute the message of God's unfailing love to millions of people, like himself, who so desperately need to hear the Good News of the Gospel. “I now interact with many believers,” Nanda says. “It is a joy to reach people with God's Word.”

Emmanuel Lighe returned to his former prison in Lomé, Togo with ABS in May of 2011....