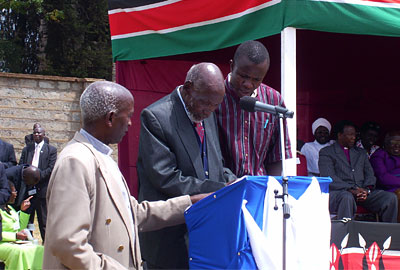 Kimani Maruge, who appears in the Guinness Book of World Records as the oldest primary school student in the world, reads from the new interconfessional Gikuyu Bible, launched on July 12, 2008. Nyeri, Kenya.

KENYA — Kimani Maruge is not sure exactly how old he is, but he thinks he was born in 1920. He certainly appears in the Guinness Book of World Records as the oldest primary school pupil in the world. His motivation for attending school at such an advanced age was to learn to read the Bible. It was therefore fitting that he should take the stage at the launch of the interconfessional Gikuyu Bible to read from the Gospel of Matthew: "God blesses those who depend only on him. They belong to the kingdom of heaven!" (Matthew 5:3, CEV).

Mr. Maruge was just one of a number of distinguished guests who gathered with large numbers of Gikuyu speakers in Nyeri town on July 12 to witness the launch of two editions of the new interconfessional Gikuyu Bible: one with the deuterocanonical books and one without. The Bible Society of Kenya was particularly honored to welcome President Mwai Kibaki, who also attended a meeting with a Bible Society delegation the previous day to discuss religious education in schools. 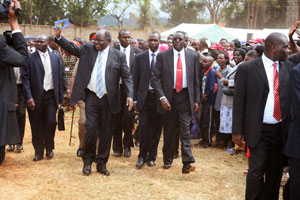 President Mwai Kibaki holds a copy of the Bible Society of Kenya's Portion Path to Healing at the launch of the new interconfessional Gikuyu Bible in Nyeri, Kenya, on July 12, 2008.

In their speeches at the launch, both President Kibaki and Bible Society General Secretary Elizabeth Muriuki referred to the post-election violence that erupted in January and emphasized the importance of unity among Christians and among people of different ethnic backgrounds. Aware of the need for long-term efforts to promote healing in the nation, the Bible Society also used the launch of the Gikuyu Bible as an opportunity to distribute Path to Healing, a Portion published in both English and Kiswahili which contains Bible verses relating to hope, repentance, reconciliation, forgiveness, healing and restoration. In full view of the crowd, President Kibaki took a copy of this Portion and signed the commitment on the front page which states:

I thank God that I am privileged to be a Kenyan. Understanding what our country experienced in the early months of 2008, I commit myself to repent, forgive, seek reconciliation and bring hope to our beloved country.

As well as distributing 3,000 copies of this Portion free of charge at this event, the Bible Society experienced very high levels of demand for the new Bible, which was being sold at a 10 percent discount. Indeed, such was the eagerness of many people to obtain copies for themselves and their families that crowd control became a real concern. Nevertheless, everybody was eventually served.

"This was a very special day for us," concludes the Bible Society's account. "We saw God's favor and we give all the glory to him."

“My life has been totally transformed.”

A child rescued from a life of violence in Togo through Scripture.