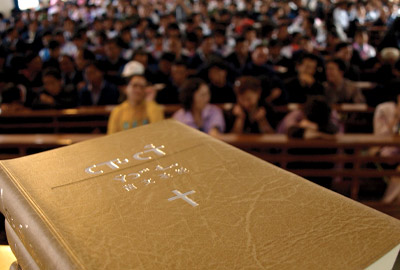 The Big Flowery Miao have had the New Testament in their everyday language since 1917, when a missionary named Sam Pollard came to work with them. As the Miao had no written language, Pollard worked for years to develop a script so he could translate God's Word for them. Remembering how some translators had created a script for Native American languages, Pollard developed an alphabet — now called the Pollard Script — that allows readers to differentiate between the five different tonal sounds of the Miao language. Pollard also credited the assistance of a non-Miao Chinese pastor with the project's success.

But it would be more than 90 years before Pollard's dream to see the whole Bible was completed. The Big Flowery Miao people finally received a translation of the Old Testament in their language, in September 2009.

According to the Joshua Project, 20 percent of Big Flowery Miao do not profess faith in Christ, abandoning religion altogether or practicing animism and ancestor worship.

But a new opportunity is now brought to these communities. Wang Mingguang, a Miao preacher and member of the Old Testament translation team, said, “A lot of our people's command of the Chinese language is weak. I cannot preach entirely in Chinese or our Miao believers would return home without having any spiritual input for the day.”

By His Wounds We are Healed

From the Brink of Death: Two Miracles in China

God saved Jian's Life. Now he and his mother are learning to read God's Word together.