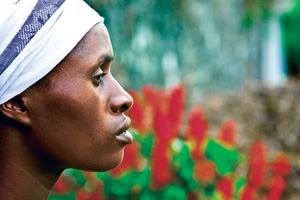 Flora, 27, raised goats and worked in other forms of agriculture in the Eastern Democratic Republic of the Congo. One day, she heard gunshots and ran into the bush for safety. There, soldiers captured and raped her. This experience deeply scarred her. But she believes in God’s power to help and strengthen her. Photo by Malorie Tull.

“Praise the Lord, who carries our burdens day after day; he is the God who saves us.”Psalm 68.19 (GNT)

From the air, the Democratic Republic of the Congo (DRC) glimmers green with grassland and jungle. Plateaus merge into savannas, and high glaciated mountains rise above the landscape. The Congo River, with its myriad tributaries,
lazes through the country in a picture of tranquility.

But from the ground, an entirely different reality emerges. Warring factions — intent on exploiting DRC’s rich mineral resources — are routinely killing men, women and children, pillaging the land and the soul of its people.

Since fighting began in August 1998, 5.4 million Congolese have lost their lives in the second deadliest conflict since World War II. Some 45,000 people die each month; children account for 47 percent of those deaths. An approximate 1.5 million people are on the run — their homes, churches, schools and villages burned to embers. Diseases, such as malaria, pneumonia and malnutrition, are rampant and a direct result of the conflict.

Killing is routine. And so are sexual crimes against women and children. In Eastern DRC, the prevalence of rape and other sexual violence is described as the worst in the world.

The situation is grim, complex and largely ignored by the Western world. But that must change, and American Bible Society has pledged to make DRC and the surrounding African countries a point of geographic focus over the next five years.

“We are responsible and accountable to do what it is that God has put before us,” says Robert L. Briggs, executive vice president of Global Scripture Ministries for ABS. Briggs adds that we cannot turn away from this place where the power and promise of God’s healing Word must be known. Citing Psalm 68, he says, “The Lord is the father of the fatherless and the protector of widows. He provides for the needy and delivers his people from death.”

ABS has clearly taken the message of this Psalm to heart. 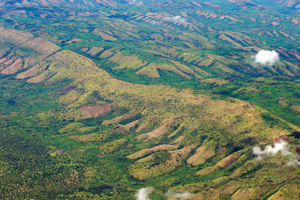 Aerial view of the Eastern Democratic Republic of the Congo, which is home to lush beauty. It is also rich with minerals, such as cobalt ore, copper, diamonds, tantalum, colton and cassiterite. The exploitation of these minerals lies at the heart of the conflict, which has claimed the lives of 5.4 million Congolese since 1998. Photo by Lee Manis.

Two years ago, ABS had its first experience of the brutality in DRC when employee Bagudekia Alobeyo asked his colleagues to pray for his family in Dungu, DRC. Ugandan rebels had staged a brutal attack against civilians there. People were killed, women were raped, and children were taken as sex slaves, soldiers and miners. The village was burned to the ground, and those who managed to escape, such as Alobeyo’s family, were forced to live in the bush.

After much prayer, planning and contributions from many people, ABS helped Alobeyo rescue his family; a pilot airlifted his immediate and extended family and moved them to Ariwara, close to the Ugandan border.

While this seemed like a scene from an action movie, it brought the brutality of DRC home to ABS. Once that happened, there was no turning back.

Briggs describes the immense needs in DRC. First, a dearth of Bibles exists. Congregations may only have one Bible, and church leaders routinely share one Bible with other pastors. In a region dominated by violence and brutality, having access to God’s Word is an absolute necessity.

Second, people are running for their lives at the hands of vicious militia. Consequently, they need food and shelter, as well as Scripture, to sustain and encourage them.

And third, women and children are being extorted and used as weapons of war. This “unprecedented rape and sexual brutality,” says Briggs, is forcing them to live with physical and emotional scars that cannot heal overnight. Church leaders are trying to help these women, but need to learn how to counsel them appropriately.

“It’s Bibles plus the care plus the comfort that people need to put their lives back together” says Briggs. The scope of the problem is enormous, and its roots are deep.

In response to the crisis, ABS has launched two programs. One is a Scripture and food project.

For this initiative, ABS partnered with the Bible Society of Congo

(BS-DRC) and the Evangelical Church in Central Africa to bring relief and God’s Word to 2,500 displaced people living in a church compound in Dungu. The effort includes Bibles, food for a month, blankets and hygiene packs.

Another ongoing project offers Scripture for rape survivors. In partnership with BS-DRC, ABS is promoting Scripture engagement with pastors, rape survivors and families over the course of three years in the regions of Goma, North Kivu. This project is designed to expand BS-DRC’s collaborative work so it can holistically reintegrate female survivors of sexual violence into society (see sidebar at right). 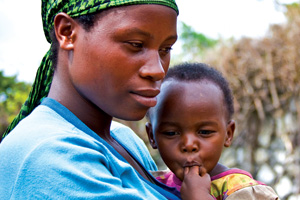 Janette, 21, was a tradeswoman, selling beans for a living. One day, a group of attackers accosted and raped her. She fled to the bush, then returned to her husband, wounded in body and spirit. Rather than reject her, Janette‚Äôs husband embraced her and sought a place to treat her. They have since moved to a safer village, and Janette has found strength in God who protects and sustains her. Photo by Malorie Tull.

The Center of the Conflict

Established as a Belgian colony in 1908, DRC — formerly known as Zaire — has been plagued by political and social instability for more than 50 years. Leaders have come and gone; corrupt regimes have toppled, only to be replaced by equally corrupt rebel groups. In 2006, DRC held its first free, democratic, multiparty election in more than 40 years. But this government remains powerless to stop the violence.

Eastern Congo is rich with minerals, and the exploitation of these resources lies at the heart of the conflict. It is the world’s largest producer of cobalt ore and a major producer of copper and diamonds. Also plentiful are tantalum, colton and cassiterite, which are used in the fabrication of electronic components in computers and mobile phones.

The illicit exploitation of these natural resources has characterized the conflict since it erupted.

Although the media and other organizations have documented the problem, no effective action has been taken to stop this exploitation. In fact, the warring parties — which include soldiers from the Congolese army and their commanders have consolidated their economic bases and become even more entrenched.

These armed groups profit from the multimillion-dollar mineral trade by forcibly controlling the mines and extracting bribes and taxes. European, Asian and North American companies buy the “conflict minerals” and sell them to manufacturing companies, including firms in the electronics industry.

International response to the conflict has been tepid. Dialogue and peace talks have skirted around the economic dimension of the conflict, which fuels the problem. Consequently, the warring parties and the companies that do business with them continue benefiting from the mineral trade with impunity.

In the process, the lives and hopes of millions are destroyed.

Learn how God’s Word is helping victims of rape in the DRC.

Green Spots in the Lava

In late January, a delegation from ABS conducted a ministry assessment in DRC. The picture was at once grim and uplifting. The ABS delegation saw firsthand the immense suffering that is rampant in DRC: abandoned children living in a makeshift orphanage; a grandmother raising the children of her recently slain daughter; a family on the run with no money, living in a burned-out building.

But the group also witnessed “abundant joy,” says John Walter, director of National Campaigns for ABS. Walter, a delegate on the trip, describes a moment that stood out from the others. It was a worship service in which 1,500 Congolese crammed into a small church, crowded outside the windows and stood on scaffolding where the roof still opened to the sky.

The pastor began the service, speaking into a microphone that was powered by a car battery. He began to sing the first strains of a melody, but was quickly overpowered by 1,500 voices that sang in harmony. Walter calls it the “wall of sound” which simultaneously pressed him into his seat, yet lifted him off his chair.

Their joy was “extraordinary,“says Walter, and seemed at odds with the poverty of their situation. He describes this moment, and others like it, as “green spots in the lava” — signs that joy and hope can break through the bleakest of circumstances.

It is this certainty that propels ABS forward. Briggs, who was part of the delegation, promised DRC’s church leaders that ABS would not ignore the plight of the Congolese.

“There is a desperate need for ABS and the Church in the West to sit up and take notice of what‚Äôs going on in the region” Briggs says. “We’re going to do all we
can to help.”

His promise to the Congolese: We will not forget you.