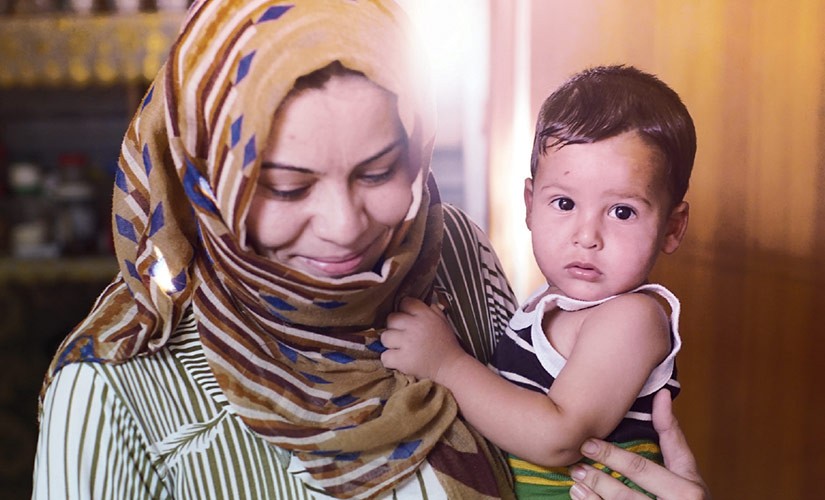 Miriam was bleeding. Her wounds, however, were invisible. They were wounds of heartache, fear, and emotional torment. She is a refugee who fled Iraq to the relative safety of Jordan, where her troubles followed her.

Miriam’s husband drank. He hit her. Once, in a rage, he tried to stab her to death.

Her husband’s family controlled what she ate. Sometimes, she resorted to stealing bread or

tomatoes to survive. When she got pregnant, her thin frame could hardly bear the weight.

She did what she could to care for her sons—but she often found herself unleashing her hurt on them.

She was like the bleeding woman in Luke’s Gospel who bled internally for twelve years with no promise of healing in sight. Miriam felt so abandoned that she tried to take her own life.

“I poured kerosene and was about to switch the lighter,” she says. Her son grabbed her dress and begged her to stop. “I imagined the bleeding woman who touched Jesus,” Miriam shares. “Then I stopped.”

Like the bleeding woman, Miriam found healing when she brought her pain to Jesus. She revealed her wounds to him in a Bible-based trauma healing group in Jordan. There, she found strength and declared, “I am not afraid of anything now, because I have Jesus with me.”

Imagine you’ve experienced the kind of trauma Miriam has endured. You feel broken and helpless— incapable of sharing your pain.

Someone in your community notices you’re withdrawn and recommends Bible-based trauma healing. You’re skeptical, but desperate. You go.

Here’s what happens in a Bible-based trauma healing group:

Once a week, in a small group of 6-8 people, you hear stories of suffering, and a trained facilitator helps you talk through them. Talking through others’ deep pain helps you work through your own.

Throughout this process, you read Scripture passages that remind you of God’s love and presence in the midst of your suffering.

You discuss what grief looks like, and you learn that lament is grief with a voice. Looking to Scripture for examples, you discover that laments are a biblical way of working through pain with God.

You write your own lament. When words cannot capture your heartache, you draw your grief in a therapeutic art exercise. You begin to open up and tell others your story. You cry for the first time in months.

The facilitator reads Bible passages about Jesus’s pain. You feel like the words are written about you. As you look at the cross placed in the room, you think of how Jesus suffered just like you. You discover that Jesus is the Wounded Healer, a God who intimately understands your suffering. And, more than that, he has conquered it—and invites you into a life of greater resilience.

You write down the deepest wounds of your heart as your grief flows onto a special sheet of dissolvable paper. You place your dissolvable paper in a bucket of water at the foot of Jesus’s cross. As you watch the paper dissolve, you feel your hurt dissolve. Your pain is replaced with a sense of hope that maybe this is not the end, but a new beginning. You begin the journey to reclaiming your joy. Just like Miriam.

“When I took part in the trauma healing, I felt that I can breathe again,” Miriam says. “I needed someone to listen to me. I needed to tell someone what had happened to me.”

Before, Miriam thought God was untouchable, distant, and full of judgment. Now, she says, “Sometimes I feel that I can see God, that I am touching him.”

Before, like many people suffering from trauma, Miriam passed her pain and abuse onto her sons. Now, freed from the cycle of trauma and abuse, she says, “All the love I get from Jesus I give to my children.”

Before, Miriam saw herself as broken: bleeding from her emotional wounds, shamed into silence and isolation. Now, she sees herself as a beloved child of God. Miriam declares, “I am the bleeding woman who Jesus released.”

Thanks to partners like you, Miriam has something she never had before: hope. “The Bible has been life-changing for me,” she shares, “I don’t want to go backwards. I want to go forwards.”

You can share Scripture’s healing power with people who are suffering. Visit ABS.Bible/JesusHeals

MOTHER WHO LOST FIVE CHILDREN IN ONE DAY TURNS TO SCRIPTURE

God restores and heals the emotional wounds of an unspeakable tragedy