A Living History of God's Word 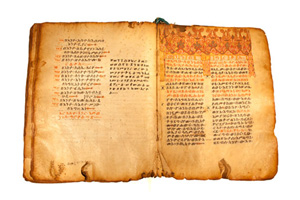 Dating to the thirteenth century, this Ge’ez (ancient Ethiopian) Gospel book contains a colophon indicating it was commissioned by a woman and dedicated to her daughter. This is one of the earliest-surviving Ethiopian manuscripts, gnawed by rodents. The Gospel book illustrates female literacy and readership of Scripture and a mother’s strong desire, at great cost, that her daughter would have the privilege to own, cherish and read the Gospels herself. Photo Courtesy of The Green Collection.

The Verbum Domini exhibit, sponsored by American Bible Society and the Green Family, now showing at Vatican City and running until April 15, assembles more than 150 of the world’s rarest bible text and artifacts from the Green family collection.

“As we consider the Bible artifacts in this collection, we are reminded that we stand on the millennia of faithful men and women,” said R. Lamar Vest, president of American Bible Society, which cosponsored the exhibit. “By continuing the work of Bible engagement in the 21st century, we are writing the next chapter in biblical history.”

Items on display, which are significant to people of various faith traditions, include:

“As the world travels to Rome for Lent and Easter, where hundreds of thousands of people will visit St. Peter’s Square, there is no better stage on which to share the history of God’s Word with people of all faith traditions,” said Steve Green, who oversees the development of the Green Collection.

“The exhibit is not just a celebration of the past, it’s a living book that speaks to every generation and culture,” says Geof Morin, Chief Communications Officer of American Bible Society. “So many men and and women risked so much and worked so hard to faithfully pass on God’s Word throughout history and around the world. Now it’s our responsibility to put God’s Word into practice in our own lives.”

Women at the Jesus House of Prayer learn about health care, nutrition and microenterprise so...

Scripture Ministry That Speaks to Trauma

Pastor Ubutu Assuni is pictured (second from right) above. He is standing with the Nyanga...