Together we’re overcoming obstacles to Bible translation. It now takes one-fifth the time to complete a New Testament translation. 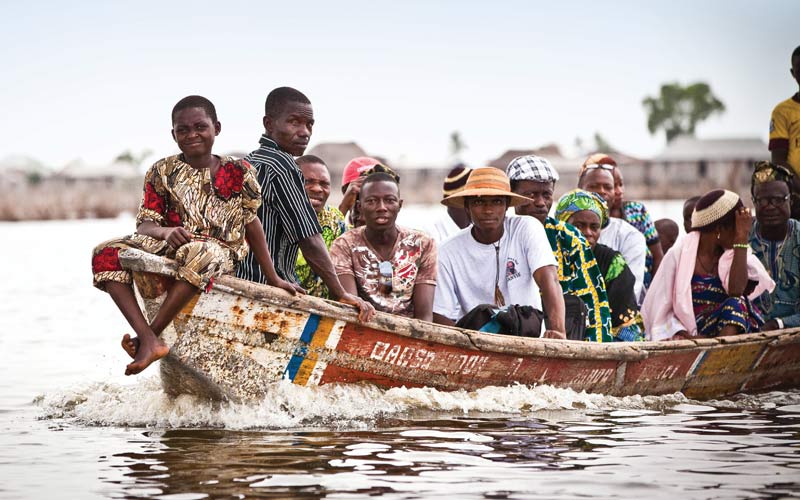 Théodore Yébovi makes his way to the Bible Society office each day through the winding, dusty streets of Lomé, Togo’s capital city. The journey from his house on the outskirts of the city to the old, cement building in the center of town is 30 kilometers, which he often traverses on the back of a motorcycle taxi.

When he arrives, he opens his computer and eases into his seat at a long wooden desk— Yébovi on one end and his colleague on the other, silent bookends translating the most precious story of all: the Bible.

This work of Bible translation is in high demand. More than 4,000 of the world’s nearly 7,000 languages still do not have a complete Bible. Many of the approximately 2,000 translation projects under way continue through war, tsunamis, genocide and faulty equipment. Bible translation is perilous, even though the need for God’s Word has never been greater. 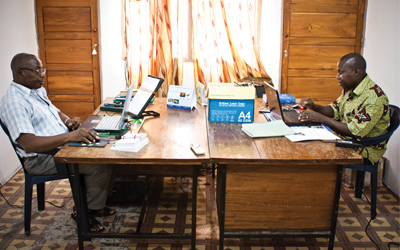 Théodore Yebovi (left) and his colleague translate the Old Testament into Mina at the Bible Society of Togo office.

One of the greatest advances in Bible translation came in 2010 with the formation of the Every Tribe Every Nation alliance, a partnership of financial partners and Bible agencies, including American Bible Society, United Bible Societies, Wycliffe, Seed Company, Biblica and SIL. Together these agencies commit to overcoming obstacles in translation. Recently the Every Tribe Every Nation alliance began two New Testament translation projects on a three-year timeline— one-fifth the time it took the average New Testament translation just three decades ago.

The need for rapid acceleration in translation is something Yébovi has seen firsthand in his work translating the Old Testament into the Mina language. Although the Mina are one of the largest people groups in the country, Mina Christians still have to read the Bible in a trade language— either French or Ewe.

Without a Bible translation in their heart language, Christians have difficulty growing in their faith. In some rural Mina villages, less than 2 percent of people identify as Christian. Most practice traditional religions. Even among Christians, it is easy for leaders to take advantage of a congregation that doesn’t know the Bible. And the Church itself won’t flourish.

The urgency of this situation motivates Yébovi to press on in the work of Bible translation, using all the resources available to him—including new technologies.

The flagship digital tool of Every Tribe Every Nation is the Digital Bible Library (DBL), an online repository of completed and ongoing Bible translations around the world. As of October, the DBL has acquired 944 texts, from recent translations to digitized versions of older, print translations.

“When translators were using pencil and paper, the process would take 30 years,” explains Nick Garbidakis, the operations coordinator for the DBL and CIO/CTO of American Bible Society. “They faced wars, floods, fires, genocides, you name it. Without Internet access, 10 years of translation work would disappear when a tsunami struck. With today’s tools, we don’t have to repeat these issues. We have all the texts in a centralized, secure place.”

It’s because of the DBL that translators like Yébovi know their work is safe. In the 10 years he has worked on the Mina translation, he has persevered through irregular power and spotty Internet access. But his biggest hurdle came when his laptop was stolen halfway through the translation project. All the files were lost, and he had to start translating again. From Genesis.

But now, every time Yébovi saves his progress, it’s backed up automatically. No thief will steal his work again.

Every Tribe Every Nation also increases the productivity of translators by training them to use translation tools such as ParaTExt, a computer program that includes commentaries, comparative translations and automatic back ups to the DBL. Before ParaTExt, Yébovi explains, he would have 28 different Bibles, commentaries and reference books open on the table to ensure the accuracy of every verse he translated. Now he can easily access all these tools and more on his laptop.

In rural Zambia, two pilot Bible Society translations of the New Testament in the Ila and Nsenga languages are experiencing the full benefits of new technology and coordination through Every Tribe Every Nation.

In addition to having access to tools such as ParaTExt, translators also can receive training from experts in Bible translation. Both projects, which began in 2012, are on track to be completed in 2015—two of the fastest Bible translations to date. “We’re accelerating translation by eliminating road blocks,” Garbidakis says.

But the benefits of Every Tribe Every Nation don’t stop once a translation is complete. Because texts are stored in the DBL, distributing God’s Word in the final Scripture translation becomes easier. Digital storage of Scripture makes it possible to reprint previous editions.

“Before the DBL, we had hundreds of texts that were only available in print and could not be reproduced,” Garbidakis explains. “We digitized these texts so that we can make them available to all the Bible Societies, and they can typeset them and prepare them for printing.”

The DBL also makes it possible to provide the Bible to people in electronic formats, such as the popular Youversion Bible app for mobile devices and BibleSearch website housed at Bibles.org. Before translations were collected in the DBL, Youversion representatives would spend precious time traveling around the world to access each different translation for distribution. Sometimes the files for these translations were saved on floppy discs, or the texts were only available in print, explains Garbidakis. It would often take months to get one text. Now any time a new translation is finished and permissions are granted, Youversion gets an electronic version, and it’s in the system in hours.

One Bible translation that recently launched in the Cook Islands was completely digital. Recipients waved their cell phones in the air as they downloaded the Bible onto their phones.

There is still much work to be done. Millions of people, representing thousands of language groups are still waiting to hear God’s Word in their heart languages. But now these projects, including the 54 translation projects supported by American Bible Society, can continue at an accelerated pace.

And for Yébovi, the celebration can begin. The recently completed Mina translation is ready for publication and will soon bear spiritual fruit in his community. He has already planned literacy and evangelism programs, using the Mina Bible translation as a tool. And soon, thousands of Mina people in Togo will be able to read Scripture during church services, consult the Bible for guidance and listen for the voice of God speaking through his Word—all in the language that their mothers used to sing them lullabies.

“It’s a blessing and a grace to have the opportunity to really work for God, and to translate His Words,” Yébovi says. “It is the best job a human being can do.”

You can help share God’s Word around the world! Visit: ABSRecord.com/translation

Scripture portions distributed to the homelessMore than 1.3 billion people speak some form of Chinese as...