When America's earliest settlers arrived in the New World, they brought their Bibles with them — Bibles written in their heart languages — languages such as English, Dutch and German.

But what of the Native Americans who were already here and who had no written language? What Scriptures would they use?

It took the dedicated work of an English clergyman named John Eliot more than 30 years to bring the Bible to his Native American neighbors. As a result of his work, the first Bible published in America — and in the New World — was not written in English, but in the language of the Algonquin Indians in Massachusetts.

Eliot, a Cambridge-educated clergyman, who was known as the “Apostle to the Indians,” settled, in 1631, near what would become Boston. He immediately saw the need for a Bible in the Algonquin language. But without a written language, this was no simple task. With the help of an Algonquin companion, Eliot mastered the local dialect and created a written language for the tribe. Within 30 years of his arrival, the New Testament was published in Algonquin and two years later, in 1663, the full Bible was published. It was America's first Bible.

Today, that Bible is part of the American Bible Society's 45,000 volume holdings. More specifically, it is one of 3,000 treasures of the Rare Scriptures Collection, which resides at the Society’s headquarters, Bible House, in New York City.The Bible in the Algonquin language is housed along with other “biblical treasures,” securely behind glass doors, where the temperature stays a steady 66 degrees and the humidity a comfortable 31 percent. And, keeping a watchful eye over the Collection is Dr. Liana Lupas, a veteran ABS employee who was trained as a classicist in her native Romania.

Over the last two decades, Dr. Lupas has cared for the ABS Collection — the largest collection of Bibles in the Western Hemisphere. As part of her responsibilities, she arranges special exhibits so the general public can have access to the works. A recent exhibit at the Snite Museum of Art at the University of Notre Dame in Indiana was open to the public; and in New York, both private and public tours are often given at Bible House. Citing the public's interest in the ABS Collection, Dr. Lupas enthusiastically confides, “I never say ‘no' to anyone.” 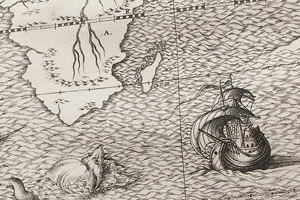 Detail of an engraving of a 1571 world map that shows the New World was barely defined.

View a timeline of Bibles in the New World (PDF)

Dr. Lupas' enthusiasm can be attributed to her passion for God's Word and her long-standing commitment to the ABS mission. “I love all the books,” said Dr. Lupas of the Collection. “They are all important, whether they have monetary value or not.” But she readily admits, some of the books in her care have significant historical value — such as the collection she calls “America’s Earliest Bibles.”

Pages within some of these rare books are treasures in and of themselves. Dr. Lupas points to an engraving of a world map that is part of a book printed in 1571 — less than 100 years after Christopher Columbus discovered the New World. Knowing when the map was created helps explain some of the places highlighted on the Map. For example, although Australia was still unknown to Europeans at the time, the cartographer shows it using lightly- defined land lines. Seems the country, which was officially discovered by the Dutch in 1606, was “just a rumor in those days,” said Dr. Lupas.

The map also highlights a region in Peru called Ophir. Dr. Lupas explains that the area is most likely named for its similarity to the biblical Ophir, an ancient land known for its gold, which is mentioned in 1 Kings 9.28 and 2 Chronicles 8.18.

Asked if there are further acquisitions on her mind, Dr. Lupas looks around the room and smiles, clearly pleased with the vast array of books. “The perfect library is up there,” she says pointing toward heaven. “We have an extraordinary collection here. Of those we lack, there are a few I know I won’t get. For example, I won’t get a [full] Gutenberg, so I try to make peace with that.”

Journeys - Something Good Every Day

Giving From The Heart