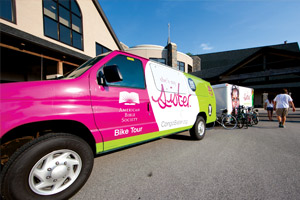 Eight determined cyclists with their gear rode from Daytona Beach to New York City, cycling close to 2,000 miles to carry the stories of abused and traumatized women and children.

These were only a few of the challenges facing this year's She's My SisterTM bike tour team — a group of eight cyclists who rode nearly 2,000 miles up the East Coast to raise money and awareness for rape victims in the Democratic Republic of Congo (DRC).

The DRC — known as the rape capital of the world — has been ravaged by military conflict regularly for 15 years. Today, civilians are prey to multiple militias as well as the Lord's Resistance Army. Four women are raped every five minutes in the DRC, according to a 2011 study by the American Journal of Public Health. This equates to 48 women per hour and more than 1,000 women per day.

The initial trauma and pain are not the only issues afflicting these women. Many times, communities shun rape victims, and the women remain under threat of their husbands leaving. Other repercussions, such as pregnancies, wounds and HIV/AIDS infections, also occur on a regular basis.

This second annual bike tour was part of American Bible Society's larger She's My Sister initiative, which uses Scripture-based trauma healing programs to give survivors the psychological and spiritual support they need.

The cyclists left Daytona Beach, Fla., on June 8 and finished in New York City five weeks later on July 16. The riders' goal was to raise money to help 14,000 women in four different areas — Banda, Bangadi, Doruma and Duru — who have been ravaged by military conflict.

Amanda Olsavsky Hu, lead planner for the bike tour, said she loves the passion the cyclists have for turning God's Word into action.

“Being a part of She's My Sister, and specifically the 2011 and now 2012 bike tours, has made me excited about seeing the lives of the cyclists and those who they have come in contact with be transformed,” Hu says.

This year's team was composed of people from all walks of life, all with a passion for helping those who are hurting in the DRC. Gordon Brown, a construction worker from North Carolina, biked for the second year in a row.

“Once I came to know the women and their stories, the statistics disappeared and the life of a hurting human came to the foreground. I had to do something,” Brown says. 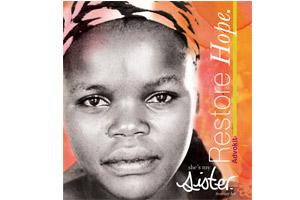 You can be an Advocate

If you are moved to be a part of sharing God's heart for restoration and the healing that can happen through his word, please consider becoming a Sister Advocate.

Healing the Broken-Hearted in Rwanda