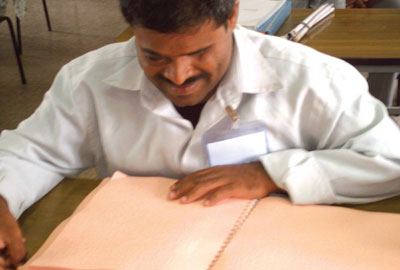 A blind man reads Scripture from a Bible Portion in Braille. The Bible Society of India provided Braille portions in at least six Indian languages to help meet the needs of the visually-challenged population. Photo by Malorie Tull.

Religious extremism and traditional beliefs can make life hard for millions of blind Indians, who are, at times, ostracized by even their own families. While the Church is growing rapidly in India, the visually impaired remain one of its most under served members. The Bible Society of India ministered to them by supplying Scripture materials in Braille, Talking Bibles (audio recordings) and white canes to organizations working with the blind. The Scripture is available in English and local languages such as Tamil, Malayalam, Hindi, Kannada and Telugu. To date, an estimated 9,500 people have received Braille Scripture and have become engaged in reading it and using it through partner churches, house prayer groups or Bible study camps organized for the visually impaired in various Indian states.

Amidst Unemployment and Poverty, Children and Parents in Nicaragua Need Hope from His Word