Celebrating God’s Word Around the World

Bible exhibit captures the power of Scripture to reach the world and beyond. 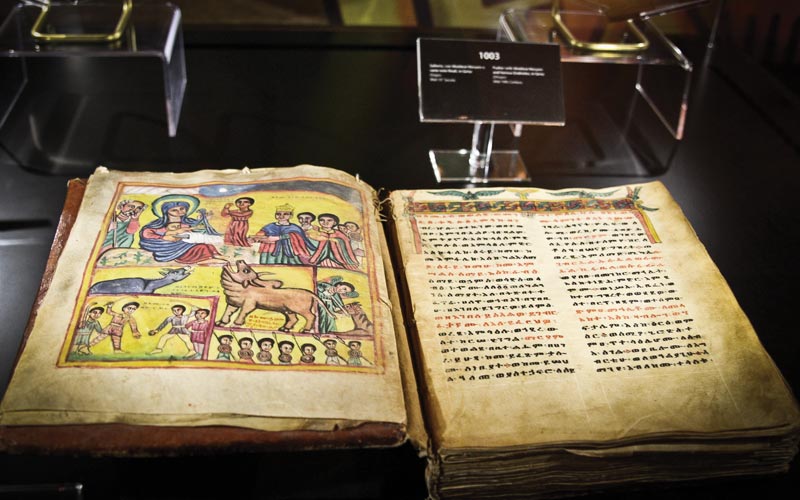 This full-page miniature depicts the adoration of the Magi and the miracles of the virgin Mary in Ge’ez. The manuscript was copied by the scribe Wäldä Maryam, Ethiopia, in the late 19th century. Photo credit Maria Wolf.

Verbum Domini II: God’s Word Goes Out to the World is a remarkableBible exhibit that testifies to the power of Scripture and people’s thirst for the Word of God.

Launched at Vatican City in early April, the exhibit showcased more than 200 sacred artifacts from the Green family’s private collection. It traced the Bible’s worldwide journey, which started in Greece and went to Northeast Africa, China, the British Isles, North America and, finally, the moon.

It also showed the sacrifices people made—some with their lives—to bring the message of Jesus to others.

In an interview just before the opening, Steve Green—who heads Bible exhibits on the Green family’s behalf—talked about his love for God’s Word, which was a gift he received from his parents, David and Barbara.

These devout Christians showed Steve and his brother Mart the importance of engaging with Scripture and living its message. Steve remembers going to Christian camps, which were “strong faith builders” in his life. The camps, in addition to the example his parents set for both children, laid the foundation for Steve’s love of the Bible from his earliest days.

That love for God’s Word has, in turn, fueled his passion—and that of the entire family—for collecting sacred artifacts. At last count, the Green family had accrued more than 40,000 artifacts in their private collection, an impressive feat given that they bought the first piece about five years ago.

Experiencing the Exhibit
Impressive is one word to describe Verbum Domini II exhibit, which was sponsored, in part, by American Bible Society. Compelling and inspiring are two others. A globe at the entrance of the exhibit spins, and recordings of Gregorian chants immediately signal the sacred walk visitors will take.

Gallery after gallery in Verbum Domini II showcased artifacts from different parts of the world, capturing people’s devotion to God’s Word throughout the ages.

For example, one gallery contained sacred texts and artifacts from Northeast Africa. Here, an Ethiopian manuscript depicted the life of Mary. This manuscript, one of the plethora of Marian visual arts from the mid-15th century, demonstrated the Ethiopian Church’s devotion to her.

A beautiful array of psalters, Bibles and Torahs graced the other galleries— each with its own story and journey. Looking at them, one can only imagine the people who cherished God’s Word and were determined to pass it on—no matter the cost—to others.

This point was clearly demonstrated in a video that chronicled the story of five American missionaries who were killed in 1956 while trying to make contact with the Huaorani tribe in Ecuador, an extraordinarily violent people group.

Although these missionaries lost their lives, their sacrifice to bring God’s Word to the Huaorani tribe did not go in vain. Family members of one of the deceased missionaries befriended a woman from the tribe and eventually moved in among them. An amazing thing happened: The homicide rate dropped almost immediately by 90 percent.

The transition from violence to peace occurred because of the Bible, said a tribal chief. “We acted badly until they brought us God’s carvings. Now we walk his trail.”

Aside from making its way into people’s hearts, God’s Word also made it to the moon. A 4-centimeter square of microfilm with 1,245 pages of the King James Bible was on display after having landed on the moon Feb. 5, 1971.

God’s Word is For All
In a private interview, Barbara Green talks about Verbum Domini II, the successor to Verbum Domini, which showcased the contributions of a variety of faith expressions to the Bible.

“We never thought our lives would take this direction,” says Barbara, referring to the family’s extensive collection and Bible exhibits. “But the Lord has his plans, and we are just following his lead.”

David Green, CEO of the Oklahoma City-based Hobby Lobby, agrees that the family is simply following God’s lead. He also emphasizes that the Bible is for everyone.

“We shouldn’t put so much emphasis on the things that are different among us,” says David. “We cannot draw yellow lines around the Scriptures,” says David. “His Word is too important not to share.”

As Verbum Domini II showed, God’s Word could not be contained to just one corner of the world. It traveled from one place to another, touching the hearts of those who came before us— and those who are to come after us.

As the number of Christians in China continues to grow, the demand for God’s Word in rural areas also increases.

A New Day for the Gospel in Cuba

The rapid growth of the church in Cuba has created an urgent need for Bibles.

Hope in Times of Trouble

God’s Word restores life and hope in disaster zones in the U.S. and around the globe.