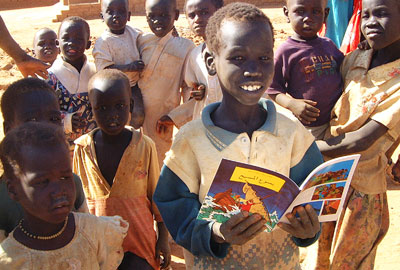 A small boy reading from a Bible Comic supplied by the Bible Society of Sudan. Photo by United Bible Societies.

At last I know how to read and write my name…exclaims a delighted Kuku Kanyar. Kuku Kanyar, 65, is a Nuba Moro man who for the past three years has been attending literacy classes in Khartoum.

The Moro felt that their language and culture were under threat and would die unless they took active steps to preserve and strengthen it. So five years ago Nuba Moro Community, the Episcopal Church of Sudan and the Bible Society of Sudan got together to set up a literacy program. It has shown steady progress and has begun to change the lives and attitudes of the people “ both Christians and non-Christians“ who register and attend the classes. 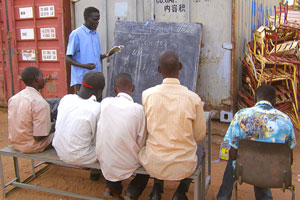 The Moro are the largest people-group among the 100 or so Nuba groups in the Nuba Mountains, the hills that rise abruptly from the plains in Kordofan Province, Central Sudan. History records that the Nuba were pushed out of Dongola, many centuries ago by Arabs who had occupied and settled the area. Dongola was a province in Upper Nile (near the present Egyptian border) that was part of the old kingdom of Makuria. As they moved southwards, some Nuba took refuge in the Nuba Mountains, while others moved on further south. The groups who settled in the mountains developed their own “ mostly distinct “ dialects.

New Testament a Spur to Learning to Read

Each mountain thus became like an independent state for a particular group which had its own administration, language and culture. Among these mountain groups, the Moro tribe seized the Moro Hills, in the eastern part of Kadugli, and settled there, eventually becoming known as the Nuba Moro. 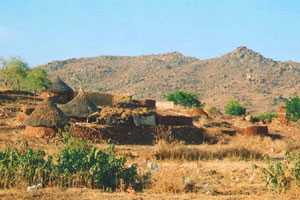 Today their numbers are estimated at more than 200,000, though they themselves believe they number twice that figure and Sudan’s unstable situation has ruled out a reliable census for a considerable time.

The orthography of the Moro language, developed by missionaries in the 1930s, paved the way for the translation of the New Testament in 1965 by the Bible Society in Sudan. Education in the area was at a low level, and the arrival of the New Testament was a spur to many to start learning to read. After independence in 1956, Arabic became the dominant language. In Kadugli and other towns in the Nuba Mountains, using local languages was considered “ahali”, primitive and undeveloped; school children heard using their mother tongue were punished with a flogging and the Nuba languages began to fall out of use.

During the 21 years of Sudan’s civil war, the Nuba Moro, like other people-groups, were displaced from their ancestral lands. Half the population fled north to large cities such as Khartoum, Medani and Port Sudan, where they lived in poverty in camps for displaced people, while others moved south to join the rebel movement, the Sudan People’s Liberation Army (SPLA). 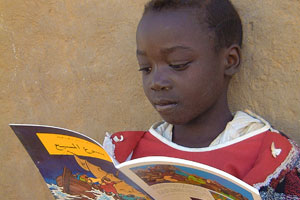 A Kuku speaking girl of about 11 years old reading a Bible Comic supplied by the Bible Society of Sudan. Photo by United Bible Societies.

The effect of the migration northwards was to mix the Nuba Moro with Arab Muslims who have their own strong Islamic culture. As result, many of the Moro, especially the younger generation, soon began to forget their culture, their language and their ancestral roots. As before, Arabic is the dominant language of the schools in the displacement camps and pupils using any other are given a public lashing as a warning to them and to others.

It was in these circumstances that the Nuba Moro Literacy Project was born. The objectives of the project are ambitious: it aims to publish learning resources and encourage the Moro community to learn to read, to encourage the Moro to write about their history and culture and, by doing so, to preserve it, and to promote the reading of the Bible in Moro so as to preserve Christianity among the people “ the urban young, in particular “ in the face of the growing influence of Islam.

The project has achieved much but more remains to be done. So far there are 19 literacy classes running in the Khartoum area. In the Nuba Mountains, literacy classes are run in primary schools in the evenings when the children’s classes are over. They have the full backing of the regional government; two Church schools make classrooms available for literacy training free of charge; a training college, the Isaac Kuku Academy, has been established to train literacy teachers and so far 23 teachers from the Nuba Mountains and 26 from Khartoum have been trained there. More teacher-training is taking place in other centres.

In addition to teachers being trained, new books have been published. Written by Moro teachers and Moro Bile translators, they cover the history of Moro culture and retell stories from the Bible and Moro folklore. In anticipation of the interest, some 40,000 copies have been printed.

Some 12,000 New Reader Portions have also been printed and distributed for use as textbooks for the emergent readers. desks, chairs, benches, blackboards and other resources have also been purchased by the project for use in the literacy centres in the Nuba Mountains.

The classes are proving very popular: many people, old and young, can now read and write as their preparation for the forthcoming publication of the Bible. Many people are also coming to know Christ through the program.

BangladeshIn 2008, we organized two youth festivals in Dhaka and Khulna. This prompted the Christian community...

“I could finally read the Bible translated in my language.”

Now with Bibles they can read, people in Burkina Faso are coming to Jesus!