Summit attendees dedicate themselves to Uncover the Word'

RecordCollege Students & In The USA 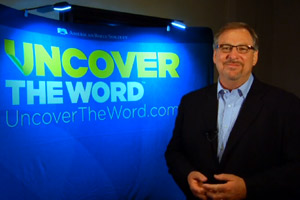 Rick Warren, pastor of Saddleback Church, joined the summit and spoke on the urgent need for Bible engagement in our country. Video still by Michael Leftwich.

The conference was indeed a summit — a mountaintop experience in which attendees committed themselves to Uncover the Word,™ a national movement of people who are committing themselves to the daily practice of Scripture engagement.

The Rev. Samuel Rodriguez, president of the National Hispanic Christian Leadership Conference, kicked off the conference with a riveting speech.

“We live in times of great instability and flux,” he said. “We've heard that Christianity in America will not survive in any viable or sustainable manner. But I beg to differ. Even though the housing markets crumble and the stock market crashes, the Church of Jesus Christ is still alive and well. It is a prophetic movement driven by the cross. I'm convinced the best is yet to come.”

The Rev. Chris Webb, president of Renovare USA, led daily devotions that drove home the centrality of God's Word in all creation and in all time. These devotions — beautiful, majestic and powerful — emphasized that attendees need to be rooted in the Word themselves before they can serve others.

Jim Mellado, president of Willow Creek Association, challenged attendees to commit to uncover the Word in their own congregations.

The Rev. Allan Figueroa Deck, S.J., executive director of the Secretariat of Cultural Diversity for the U.S. Conference of Catholic Bishops, discussed Roman Catholic perspectives on Bible engagement for the whole church. Instructional sessions featured the latest on digital tools, as well as research on Bible engagement among American adults and college students.

Dr. Kara Powell, executive director of the Fuller Youth Institute, delivered a thought-provoking presentation on how to imbue the younger generation with “sticky faith” — her term for faith that will carry them through their college years.

Dr. Powell's research shows that many Christian teens are ill equipped to withstand the pressures of college life. Students drink more alcohol and have more sex in college than they did in high school, her findings show. This is no surprise, Dr. Powell said, but the biggest increase occurred among Christian youth who struggled with college pressures.

In a special ceremony, participants signed the Uncover the Word Commitment. In doing so, they pledged to:

Attendees needed little convincing. “This movement represents the whole Church,” said Gary Benedict, president of the Christian & Missionary Alliance. “For too long, we've been silos. We need to work together as one Church.

God’s Word in the Storm

ABS staff distribute Scripture portions to victims of Hurricane Sandy. In the hours before Hurricane...

Most Americans Own a Bible, So Why Aren't They Reading It?