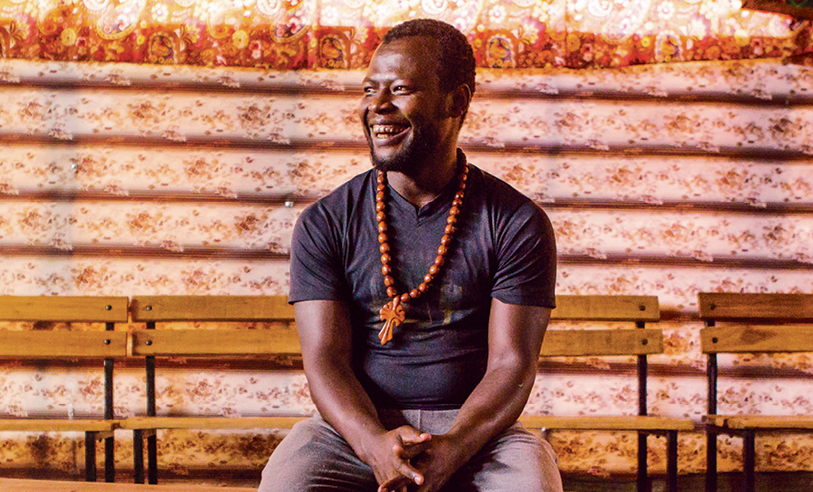 You’re on a thin mat on the red dirt of an open room. The air is stagnant and reminds you of your unmoving life here. Men lie to the right and left of you. You haven’t had space to yourself for years. Everyone here is always angry or sad, and you feel entirely lost. How did I end up here? You spend your days going over and over and over your failures, your sins. Your only solace comes right now.

Now, Deacon Demeke enters the room and puts a small black box on the floor. He hits play, and the room goes silent. All twenty-one men hush. The only noise is the words flowing across you and into you in a way you never knew possible.

“In the beginning was the Word, and the Word was with God, and the Word was God…” the box says. Who is this God? you wonder. “To all who did receive him, to those who believed in his name, he gave the right to become children of God.” Could I believe in this God? Could this God really call me his child?

This story belongs to Nesanet Kurubahcw—and to others like him. Nesanet is a young man who met God in a maximum-security prison in Ethiopia when he heard the Bible read over a Proclaimer™ in his language, Amharic. Partners like you provided this Proclaimer that now serves the entire prison. It’s carried from room to room to read Scripture aloud to some 260 prisoners every day.

+ Proclaimers are solar-powered digital players loaded with Audio Bibles. They were invented by our partner, Faith Comes By Hearing.

Our team visited Nesanet’s prison because we’d heard God was doing great things in the lives of the men there. We found that to be true. Miracles are happening in the everyday dirt and drudgery of these prisoners’ lives.

When I met Nesanet, I was struck by his youth. He didn’t raise his eyes to meet mine, and he nervously played with the wooden cross around his neck. He reminded me more of the shy high school students I once taught than of a convicted criminal.

To understand Nesanet, you need to know where he’s from. Nesanet was born in a small town called Shashemene, nestled deep in Ethiopia’s Rift Valley. Shashemene is somewhat of a tourist destination because of its connection to the Rastafarian movement, but tourism hasn’t done much to boost the area’s economy. Shops are constructed from scavenged materials like tarps and tree limbs. Simple homes are made from mud dried by the sun.

As you can imagine, living in remote, impoverished circumstances like these, job options are limited. Nesanet felt desperate to support his family, and his desperation led him down a dark path.

“When I was living in the area, I used to fight. I used to hurt others,” he says.

Describing his past to me, Nesanet drops his eyes. “Poverty led me to that type of life,” he explains. “My family, they were unable to help me to go further, even to study in a good school. That’s why I chose this life.”

One day, Nesanet’s bad deeds caught up with him. He tried to steal from someone and ended up stabbing the person when things went sideways. He was dragged to court and thrown in prison.

God Turned My Life Around

Now, more than a year later, memories of Nesanet’s sins still weigh heavy on him. He’s a young man, but he has seen the worst side of himself—and he believes he would have continued down the same path had he not been providentially thrown in prison. “God turned my life in a different direction,” he says with the first hint of a smile.

In prison, Nesanet heard Scripture read over the Proclaimer. Through the Bible’s words, he discovered there was another way to live. “I realized that I’d made mistakes,” he says. “I asked God to forgive me.”

As Nesanet has grown in his faith, he has found solace in the Bible’s message. He says, “I learned that God is a forgiving father, merciful father.” He explained to me how it overwhelmed him to learn that God became human to die to save us.

He was amazed that sinless Jesus would pay the cost for what sinful Nesanet had done. “That’s really touched me because of my salvation,” he says. “God made his son like me.”

Now, Nesanet is eager to share the grace he experienced with others. Under Deacon Demeke, Nesanet is training to be a priest once he’s released from prison.

Like Jesus, Nesanet is spending time with thieves and murders—telling them they too can know our great God. Because he takes his calling seriously, Nesanet spends his free time seeking God and studying the Bible in a small shed that serves as a church.

Even in our short time, I could see the level of respect the other young men have for Nesanet. I asked one of his friends, Yitbrark, what Nesanet is like. He told me, “He is a transformed man. His life has been miserable. But now he serves us and sings with us. He is a model for us.”

Nesanet went from being a criminal to being a model for others to serve God—all because of the Bible.

I hope you see the significance of your gift. Through just one Proclaimer Audio Bible that you provided, hundreds of men are being taught that God cares for them and has more for their lives than sin and loneliness. Nesanet reminds us there is still great salvation to come. He says, “Many others will listen to the Bible and change their lives as we have been changed.”

The Question I Can’t Shake

As we prepared to leave the prison, Nesanet pulled me aside. “Can I ask you for something?”he whispered.

I’ll admit, my heart sank with this question. I’d been encouraged by my time with Nesanet and the other young Christian men in the prison. I braced myself to say no to what I assumed Nesanet was going to ask—Could you get me a lighter prison sentence? Could you take me back to the States with you?

The real question took me aback: “Do you think you could get me a Bible of my own?”

I hope the weight of this question hits you the way it hit me. I still tear up thinking about it.

At American Bible Society, we receive a lot of requests for Bibles, but I’d never been the one directly asked the question. My first thought was, Of course. I’d never deny anyone a Bible who asked me for one. Then I realized that’s exactly what I’ve done. In knowing the need and not responding to my fullest ability, I’ve denied Bibles to people who are asking for them.

I made a promise to Nesanet: that believers around the world would be praying for him. That we wouldn’t forget him and his need. Will you join me in fulfilling my promise? Here is how Nesanet asked us to pray, in his own words, “I ask you to pray for me and for my brothers here. Pray that we may not go back to that terrible life that I would say is a cursed life, and pray that we will continue being transformed by God, God’s Word. Pray we lead a new life in Christ who changes our physical, spiritual, moral lives.”

And yes—we made sure Nesanet got his Bible.

Hear Nesanet’s story firsthand with a video of his interview.

Bibles in production at the Bible Society of Brazil's printing facility in Sao...