“God has changed my life.”

Families in Guatemala receive food for the body and soul! 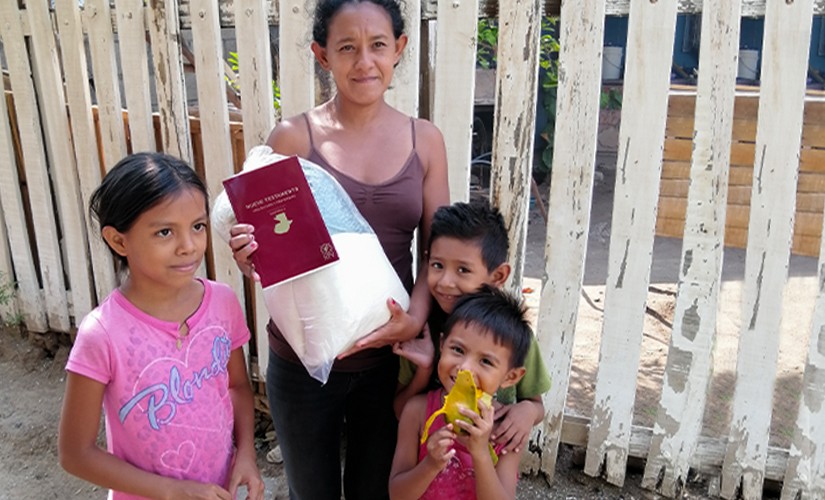 When Ariana* picked up her free bag of groceries, she was so grateful. She had no idea that the bag contained more than just physical sustenance. It also contained food for her soul!

In Guatemala, many poor families like Ariana’s struggle with hunger. Ariana grew up without a mother and endured suffering. Today, she lives with her grandmother, two daughters, and grandson. It’s hard to put food on the table, so the food distributed by a local church was a much-needed blessing. When she looked in the bag, she was excited to see a New Testament as well.

“It was the first time that the Word of God had reached my hands,” she explains. “I always knew there was a God and although my heart did not know Him, it did know that there was a great need to know Him. My true encounter was when I received the New Testament.”

After receiving her Bible, Ariana says, “I decided to accept Jesus in my heart, giving hope to my life and my family. By receiving Jesus and obtaining a New Testament, I was able to know Him. God has changed my life. Before I had no hope and now I do.”

The local church that provided Ariana with food and a Bible through our supporters’ partnership also invited Ariana to attend discipleship programs. “I know it will help me to know more about the Word of God and how to read it,” she says.

Ariana was one of about 100,000 people who received a Bible along with food in Guatemala during the pandemic. So many people in this poverty-stricken nation were fearful for their future. In addition to the pandemic, the people of Guatemala suffered from two devastating hurricanes. The food and God’s Word helped provide hope in the midst of their suffering for those impacted by both.

We are so thankful for our generous financial partners for providing Bibles and encouragement to hurting families in Guatemala.

Hope in Times of Trouble

God’s Word restores life and hope in disaster zones in the U.S. and around the globe.