For the American Military Family 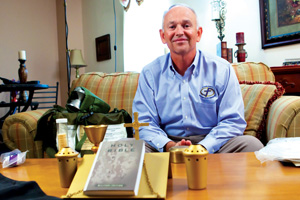 “Whoever goes to the Lord for safety, whoever remains under the protection of the Almighty, can say to him, “You are my defender and protector. You are my God; in you I trust.” Psalm 91.1, 2 (GNT)

A young lieutenant graduated from the Naval Academy and found himself quickly deployed in the Middle East. It's hard to describe the sudden transition from civilian to sailor. Now, under attack two or three times every day, he reported, “I was just reeling every day, feeling like if I didn't read my Bible and a little devotional, I didn't know if I would make it through one more day.”
After his unit survived a dangerous ambush, he was able to show his fellow soldiers how God was watching over them — even those who had earlier claimed “there is no God in Iraq.”

The combat veteran's garbled voicemail message sounded distraught. His name and telephone number were unclear, but the chaplain could tell he intended suicide.
Alarmed, a military chaplain scrambled to identify and call the veteran, and was relieved to find him calm and safe. In his dark hour, the veteran had turned to an American Bible Society booklet of Scriptures for comfort. “I just started reading it cover to cover, over and over,” he said, “and I could hear God speaking to me. I could hear God telling me that I was worthwhile, that I should not take my life, that he understood deeply my pain and that he was walking with me.”

Point of Grace’s Christmas tour is dedicated to the men and women of the military.| See tour dates »

A New Kind of War

Today's war significantly stretches even the best among us. As the military operations in Iraq and Afghanistan have become the longest wars in American history, the men and women of the United States Army, Air Force, Navy and Marines face ongoing danger, stress and separation from their loved ones and communities.

“When military personnel return from Afghanistan or Iraq or any of the 80 countries where we have boots on the ground, they are not the same,” says American Bible Society Armed Services Ministry's Acting Director, Dr. John Edgar Caterson. They have “needs that have come about because they have experienced combat or trauma.” These wounds affect veterans but extend to their families and loved ones as well.

The stories above show the urgency of these needs, but also shows that God's Word brings safety and healing to men and women in pain. To help meet the spiritual needs of the armed forces in Iraq and Afghanistan, ABS has provided troops with hundreds of thousands of Bibles and Scripture materials, as it has done for American service members for nearly two centuries. 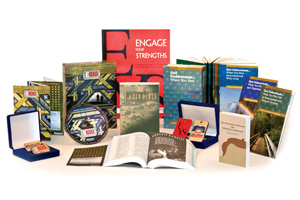 Holding It All Together

John Edgar says the length and nature of the wars in Iraq and Afghanistan have created a need for Bibles, but also “brought up issues like post-traumatic stress disorder” and other types of emotional and spiritual suffering. “It's become imperative that we are not just the providers of Scripture, but collaborate with the chaplain corps to provide scriptural resources that will bring about life change.” Accordingly, the Armed Services Ministry has partnered with military chaplains to develop and deliver Scripture materials designed specifically for active duty troops, veterans and military families.

One outcome of these efforts — the “God Understands” series — is the source of the Scripture booklet that so encouraged the distressed veteran in his time of trouble.

The “God Understands” series resulted from the joint efforts of ABS and chaplains from the Veterans Affairs National Chaplain Center. Each of the series' eight Portions speak to a specific “spiritual injury” suffered by troops, whether active duty or veteran, including grief, guilt, anger, hopelessness and fear of death. Scripture Portions are followed by reflection questions and real-life stories coming from chaplains who counsel service veterans and interact with their families and medical caregivers
every day.

Grappling with difficult emotions in light of Scripture provides a healing outlet for soldiers who can be forced to stifle emotion to hold it all together. One chaplain says of the active duty soldiers he accompanied on patrol: “I listened to their voice and watched their eyes — they know they're in a dangerous situation. What they do, they turn that stuff off — they turn off the emotion inside that for normal folks would say ‘I ain't going out there.' But they go out there and say, ‘I'm not going to think about it. I'm going to do the job at hand regardless of what the personal danger to me is going to be.' ”

It is a powerful testimony of God's Word applied to challenges many of us cannot even begin to understand. Day after day and through multiple deployments, the chaplain says, this defense against trauma “makes an impact on them. You can only do that so many times before something inside begins to deaden.” The “God Understands” series helps soldiers see God's love for them and his presence with them while facing emotional and spiritual wounds received over years of trauma or combat.

As one Tennessee chaplain described this program in action, he is clear that God's Word indeed holds the answers for so many of the questions and challenges facing our veterans. “There were tears, stories, confessions, connections and nods of agreement during scenarios and Scripture readings. The series is so potent in all its topics that it will surely bring about healing in whatever part of these veterans' lives needs addressing.” 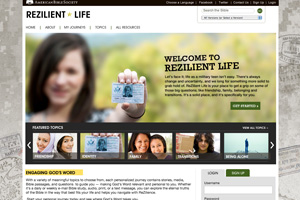 Nearly 1.1 million teens have parents who serve in the military. While there are universal struggles and challenges common to life as a teenager, these sons and daughters face theirs in an environment of constant change and uncertainty.

The Armed Services Ministry of American Bible Society, in partnership with Military Community Youth Ministries (MCYM), is preparing to introduce ReZilient Life, a Bible engagement program that seeks to help military teens confidently address common challenges, made unique by their military context — challenges such as friendships, identity, family, transitions and being alone.

Web-based ReZilient Life provides customizable Scripture journeys that address these issues from a biblical perspective. This site includes unique small and large group resources for MCYM youth leaders located on military installations around the world. In this way, these youth can experience the transformative power of the Bible and community among supportive friends who can relate to their experiences.

Back from Soldier to Civilian

Veterans changed by their service in Iraq and Afghanistan must find “a new normal,” John Edgar says. “You can't go back to life before deployment, before traumatic stress, but you have to move on.” To help with this transition, the Engage Your Strengths™ materials were developed in tandem with the Gallup Faith Practice's StrengthsFinder™ assessment. This 67-page resource book links the promises of Scripture with the strengths and gifts for chaplains, service members and their families to identify an individual's strengths and show examples of these abilities found in Scripture.

Engage Your Strengths shows individual veterans and retiring service members the ways of working, thinking and relating to others at which they excel. The program has been provided to every U.S. Army Chaplain and Chaplain Assistant (nearly 300 in total), and they are using it as they guide soldiers transitioning to life and work in all the stages of military service.

Learning more about the strength of applying God's Word to personal gift deployment, this resource was recently expanded for usage by the larger military family. In November, a special edition of Engage Your Strengths was debuted for the Protestant Women of the Chapel, a global prayer network of women supporting our nation's military, making it available for extended usage for more members of the larger military community.

For 193 years and through nine wars, ABS has provided Scriptures the U.S. armed forces.| Learn More »

A Path Through God's Big Story

Those same chaplain leaders have given their official support to another important new Scripture tool that ABS developed, in partnership with Scripture Union USA, called “The Essential One Hundred,” (E100). Chris Thyberg, director, New Ministry Initiatives, says the Bible can seem “rather intimidating” to those unfamiliar with it: “It's 1,000-plus pages, they don't know where to begin, so it just sits there and gathers dust.” The E100 leads readers through the broad story of the Bible with 50 key passages from both the Old and New Testaments. The Military E100 was later developed with U.S. Military Chaplains.

These E100 resources reach soldiers and help keep families connected. Using online resources, far-apart families can work on the same Bible devotion together. Anne LoCastro, program manager, says chaplains are reporting, “We've got guys, gals who would never attend a Bible study, never come to chapel, but we started doing the E100 and they've become regulars.” Service members are “now forming their own E100 squads — out in Afghanistan, out in Iraq, where a chaplain really can't even get to
them regularly.

“Together they're walking through the E100 journey, and they're reporting that it's just opened up Scriptures to them like never before.” The E100 Plan is now printed inside every ABS military Bible. Anne continues, “This is huge — this means that whether troops are introduced to E100 formally by their chaplains or get a Bible from us, they have that essential path through God's big story and can find themselves in the color-highlighted passages, reflection questions and prayers.”

Reading materials other than the Scriptures may help fill long hours of tension and boredom in the field, but they “are not going to feed that spiritual need” of the troops, says Les Knotts, Lieutenant Colonel, U.S. Army (Ret.). “When it comes time for protection or speaking into somebody else's life, you don't use National Geographic for that. Scripture is an ideal source for that, and if you don't have any in you, it can't come out.”

Service members with hearts changed by God's Word are given the strength they need to serve. “As the Scriptures bring healing and hope to active duty and veteran soldiers, sailors, airmen and Marines, they create a legacy of life and faith for the future,” says John Edgar.

It's a legacy well worth the investment. When distributing Bibles to Marines as they deploy, Ralph Porter of Twentynine Palms Ministries, tells them, “Take this with you to Afghanistan. When you come back, give it to your son or daughter and say, ‘This Bible went to Afghanistan with your dad.' ”

Truce of God
Exactly 150 years ago, in 1861, at the outset of the war between the States, the ABS Board of Trustees determined to place a Bible or Testament in the hands of every soldier on the side of the North and the South. | Read Now »

Cookies for Bibles
Joanna Lothers, 8½, sold cookies at her father's office to raise money for Scripture distribution to the troops. | Read Now »

The World Under Water
While serving with the Armed Forces in the Korean and Vietnam wars, Dale Akins received two Bibles from American Bible Society after an officer left a box of them in the control room of his submarine. | Read Now »

Anthony Kravit shares how the Bible is showing him the love of Jesus. Video still...