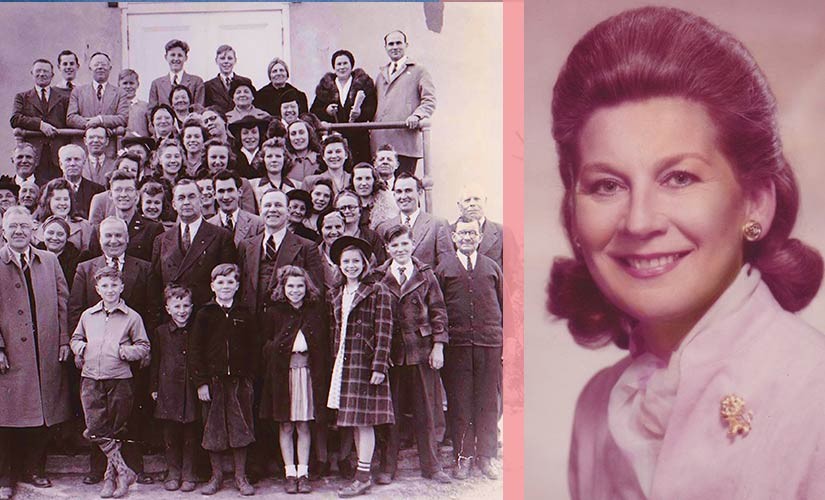 Elsie Sokol was an impressive woman. Always prim and proper, she exuded charm and acumen. She lived the American dream: starting as a bookkeeper at the Freehold Trust Company and working her way up to the position of President and CEO of Freehold Trust Company and its later expansion as Central Jersey Bank and Trust. She taught herself golf and learned to excel at it. Her style was as sharp as her mind.

To only know Elsie in this way, however, would be to miss the heart that drove her. Elsie was born into a Ukrainian American family that loved the Lord above all else. In turn, Elsie considered God and family her most important pursuits. She was faithful to give to her church and multiple charities and to live out the Good News of Jesus wherever she went. She saw the Bible as the key to success and looked to it for truth and guidance, just as she’d seen her parents do. “Our family’s values very much came straight out of the Bible,” says Elsie’s nephew, Peter Sokol.

At age 92, Elsie’s earthly life came to an end, but her passion for sharing God’s Word lives on. That’s because Elsie planned ahead to continue honoring God after she’d passed on to be with Him by naming American Bible Society in her Will. Elsie chose to pay homage to her ancestors by ensuring that generations to come also have access to the life-changing message of God’s Word. Her legacy is as powerful as her Christian heritage.

Elsie’s biblical worldview was directly tied to the strong faith of her family. Growing up, she was surrounded by God’s Word. Elsie’s niece Lois Wessel says, “There must have been 20 Bibles in that house, so that was a very big influence in all of their lives.”

Jacob Sokol, Elsie’s father, would read to the family from the Good Book every day, filling the house with the whispers of Scripture. Jacob was also a natural evangelist, passionate about building the church and sharing the Bible.

A desire to share the Good News is what drove the family back to Galicia, now a part of present-day Ukraine, when Elsie was four years old. Jacob and his wife, Annastazia, were excited to share the Bible through the local Evangelical Baptist Church. They involved the entire family in sharing about the God of Scripture. Unfortunately, the family’s time as missionaries was short-lived. The family received threats of kidnappings or worse if they didn’t cease their work with the church. When murmurs of World War II threatened to tear apart the relative stability of what is now Western Ukraine, the Sokols decided to move back to the States. Still, this formative time gave Elsie firsthand experience sharing the life-changing message of God’s Word—something that became a lifelong pursuit for her.

A Godly Home in America

Back home in the States, Elsie learned the joys of American baseball and hot dogs, as well as Ukrainian hard work and varenikes (pierogies). She also learned that one thing transcended culture: the Bible. As she grew up and saw earthly success, Elsie never lost her footing; she stayed grounded in God’s Word. Peter says, “I think Elsie saw the Bible as the formula for success. To be successful in this life, you had to gear yourself to be successful in eternity.”

Elsie learned about true success from her father and mother. Jacob and Annastazia invested in her—showing her what it meant to serve God as they read (and cried) over Scripture. Peter says, “Every evening following dinner, they would study the Bible together. And that was the environment that Elsie lived in.”

As Elsie got older, her faith matured. Eventually, as her parents aged, the responsibility of care shifted to Elsie, and she made sure Jacob and Annastazia were well supported—physically and spiritually. She would spend hours with her father in the garden, reading from the Bible. Even when she had pressing work commitments, she’d always make sure her Pop, as she called him, was well fed with food and Scripture. “Elsie was a model for honoring family,” says Peter.

For Elsie, giving back to a Christian organization was a way of honoring the parents and God she so adored. Lois says, “Giving to American Bible Society was a way for Elsie to honor her parents, my grandmom and grandpop.”

Through her generosity, Elsie honored not only her immediate family but also her extended family of Christian brothers and sisters around the world. Through her support, Elsie sent Bibles to orphans in Ukraine, to hurting hearts in Rwanda, and to waiting believers in China. Through her Will, she continues to bolster this important Bible ministry. We remember her now as an example of a strong businesswoman who faithfully lived and faithfully gave to see God’s Kingdom come. On behalf of future generations, thank you, Elsie!