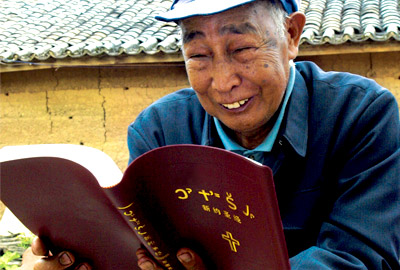 73 year-old Yan Hanquan, one of the original translators of the East Lisu New Testament, is overjoyed to see his work finally come to fruition. Photo by UBSCP/Yeo Tan Tan.

In thanksgiving ceremonies last fall, church leaders unveiled the newly translated Bible for the Miao and the New Testament for the East Lisu people. The ceremony for the East Lisu was held in one of the area's largest churches, Taogu Village Church, high up in the mountains of Yunnan province. Taogu Village Church, sitting more than a mile above sea level, is the birthplace of the East Lisu Church. It had been more than 100 years since a missionary first presented the gospel to the East Lisu people. Getting the New Testament in their language was a long time coming.

On that day, people came great distances in hopes of getting a personal copy of Scripture. A group of choir members said they walked 12 hours to reach the church in time for the ceremony. Some, knowing the church would be filled beyond its capacity, brought their own benches and stools so they could sit outside and be part of the celebration.

One of those on hand to receive a copy of the New Testament was 73-year-old Yang Hanquan. When translation efforts began on the East Lisu New Testament in 1984, most of the six members of the translation team were elderly men. Hanquan was the youngest and today is the only surviving member of that early team.

As a pastor and member of the translation team, Haiwen knows the problems of not having Scripture in people's heart language. He explained that when people hear the Bible in their own language, the stories become much more relevant to them.

“In the course of translating God's Word, I am particularly fond of Luke 14.15-24, ‘The Parable of the Feast.' To read this parable in East Lisu speaks volumes. The parable [speaks] about throwing a great feast, marriage ceremonies, buying a field and oxen. We can relate to all these activities as they are close to our East Lisu customs,” said Yong.

In a country with 55 minority languages, translation is no easy task. Learn about the history of Bible translation in China — a project 1,400 years in the making. | Read More »

Prior to publishing these translations, the Big Flowery Miao and the East Lisu did not have God's Word in the languages they speak every day. (The Miao New Testament has been available since 1917.) They are not alone. Of the 516 people groups in China, more than 82 percent of them (according to the Joshua Project) are considered unreached by God's Word, and one of the main reasons they remain unreached is the language barrier. The Bible has been available in Mandarin since 1819. But Mandarin is not the heart language of all 1.3 billion Chinese. In fact, there are 55 other languages in China, besides Mandarin — the official language — and countless dialects of the languages used by the 55 minority groups. Many members of minority people groups, such as the East Lisu, simply don't speak Mandarin.

It may be hard to conceive, but China — a country with a geography slightly smaller than that of the United States — has a population more than four times as large. This makes translation work even more critical for spreading the gospel in the world's most populous country.

The two newest translations bring to nine the number of official Bible translations available to China's 516 people groups. Also known as the East Lipo people, 50,000 to 60,000 East Lisu Christians will benefit from the new translation. The culture of the East Lisu is deeply rooted in their Christian faith, which seems amazing given that they didn't have God's Word in their language until now. 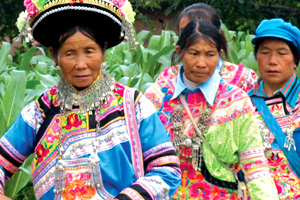 East Lisu people returning home after receiving the New Testament; one woman was carrying her own bench. Photo by UBSCP/Yeo Tan Tan.

In 1906, a British missionary, the Rev. George Edgar Metcalf, began translating the New Testament in the East Lisu language — a work that took him more than 40 years to complete. Still, even without written Scripture, the East Lisu made remarkable progress in their spiritual maturity. Within 20 years of first hearing the gospel, many East Lisu congregations were mature enough in their faith to be providing significant financial support to their churches. Metcalf finished his translation of the East Lisu New Testament in 1947. It took him another five years to have it published in Hong Kong by the Bible Society there. In a mystery of history, copies of that new translation were mailed from Hong Kong to China, but never arrived.

By the mid-1960s, China was beginning to undergo the Cultural Revolution — a time of repression when churches were closed and Bibles were burned. Certainly no translation work was being conducted. It wouldn't be until the 1980s that the East Lisu people were able to start working on translating God's Word in their own language. It would take another 25 years to complete.

While the work of translating and delivering God's Word to China is not yet completed, this is a moment for thanking God for new opportunities for tens of thousands of believers across China. “It was indeed a great celebration for the people — a celebration long awaited for more than a century,” said Yeo Tan Tan, program manager for United Bible Societies' China Partnership. 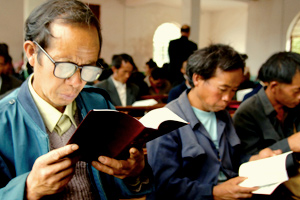 The congregation at a Miao church in Manpo, Yunnan Province, China. Photo by Dag Smemo.

While the work of translating and delivering God's Word to China is not yet completed, this is a moment for thanking God for new opportunities for tens of thousands of believers across China. “It was indeed a great celebration for the people — a celebration long awaited for more than a century,” said Yeo Tan Tan, program manager for United Bible Societies' China Partnership.