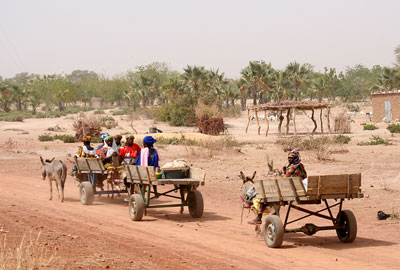 All kinds of vehicles rushed toward the remote village of Zamana for the March 7 meeting. Some were cars but most were carts pulled by donkeys, bicycles and mopeds. And many of the 300 delegates had simply walked to get to this rural area. Photograph by Joaquim Dassonville.

“Late into the night local ministers continued to come and register for the Faith Comes By Hearing® (FCBH) program,” said Jacques Dembélé, general secretary of the Bible Society of Mali (BSM). Registration for this American Bible Society sponsored program followed the annual meeting of the Evangelical Christian Church in Mali, on March 7, held in the remote village of Zamana, east of Bamako, the capital.

This Audio Scriptures program is ideal in a country in west Africa where oral traditions and storytelling is one of the oldest and richest features of the culture - a culture also where illiteracy is widespread, Islam is the predominant religion and French the official language.

Jacques Dembélé spoke to the church leaders and assured them that the Bible Society would help train the leaders of the listening groups. One of the pastors said, “Even though it is late, we won’t leave until we have registered for the program.” Some 37 leaders registered that night. The program is being launched for speakers of Bamanan, Dogon and Boomu. 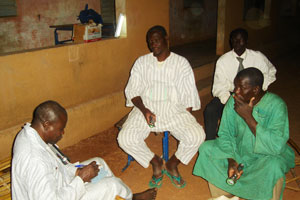 Pastors from the Evangelical Christian Church of Mali signing up for the FCBH program with Elkana Théra, the Bible Society of Mali’s FCHB coordinator. Photograph by Jacques Dembélé.

In Burkina Faso, also in west Africa, where two out of 10 adults are literate, listening groups have been implemented by the Alliance Biblique du Burkina Faso (ABBF, Bible Society of Burkina Faso.) In 2007, some 30,200 people in 576 listening groups were regularly exposed to the spoken World of God in their native language, yielding some 59 new believers at last count. A total of 220 out of 440 inmates, who were exposed to these Audio Scriptures, accepted Christ and improved their behavior, according to chaplain and personnel reports. Those who had not been baptized were attending a baptism preparation course.

Sanou Ibrahim Maurice, a former prisoner and Christian Alliance Church member in Burkina Faso, said, “Although I attend church and do some work for the church, I realized I did not understand enough [about] the Word of God. My faith changed much and I like praying. It is now that my new birth takes place. God visited me . . . in prison . . . Thank you. May God bless what our brother is doing with the [Scripture] cassettes in prison.”

“Go to the people of all nations and make them my disciples. Baptize them in the name of the Father, the Son, and the Holy Spirit.” Matthew 28.19 (CEV)

Youth Assembly delegates expressed themselves through drama at the UBS World Assembly in Seoul. Photo...