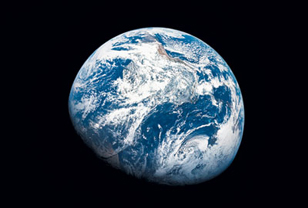 ”He named the land ‘Earth,’ and the water which had come together he
named ‘Sea.’ And God was pleased with what he saw.”
Genesis 1.10 (GNT)

It was Christmas Eve, 1968. Commander Frank Borman was more than 200,000 miles from home, leading the Apollo 8 space mission. On that holy night, Borman and his crew would be the first human beings to ever reach the moon (though no one would actually walk on it until the following July). It was a milestone moment, watched by the largest media audience that had ever witnessed any event in history.

When Borman and his crew were asked to speak that Christmas Eve, they knew their words would reach the ears of more than a billion people. That was one out of four people on the planet. What words could possibly be appropriate? After consulting with his friends and crew, Borman decided to recite the first 10 verses of Genesis — the biblical account of creation.

The View from Space

Commander Borman recounted that epic journey at the 156th annual meeting of the American Bible Society in 1972. For the first of their 10 revolutions around the moon, “we were obviously closer to it than any man had ever been before — really only 60 miles away — and we were drawn to the moon,” he said. “But after about the fourth revolution we began to seek other horizons and looked back. And our thoughts were drawn to Earth.”

Borman saw that blue-green marble in the heavens, which he could cover with his thumbnail. It was the only thing in the wide black blanket of sky that gave any promise of life. It seemed so much a symbol of God's creation and care that Borman was overwhelmed. “I thought then, and I continue to think now, that the voyage of Apollo 8 was really the final leg in my own personal religious experience.” The words of Genesis were entered into the flight plan, and the rest is history.

Today, Colonel Borman, 79, and his wife, Susan, live in a tiny town in eastern Montana. Some nights he still looks up at the moon and remembers what that moment felt like. “Everything that we held dear was back on Earth,” he says simply. “I was just struck by the sensation that there was an almighty hand that created that beautiful place.”

When the men came back to Earth, they were national heroes. Time magazine named the three Apollo 8 astronauts 1968 Men of the Year. But Borman never forgot the spiritual and scriptural dimension of his voyage. Shortly after he made his speech to the American Bible Society, he was elected to serve as an honorary vice president, a position he holds to this day.

Back then, he remarked that the turbulent world of the 1960s was a time of changing morals, where “instant solutions” and “personal ethics” were gaining a strong foothold. It called for a deeper look into Scripture. “The answer, it seems to me, is still to be found in the Bible,” he said. “[It] contains words that are both a promise and a mandate.” This is something he still believes.

Colonel Borman and his wife have been blessed through 57 years together, in and out of the spotlight. “We had our turn in serving our country and serving our Lord,” he says. He is content to see that a younger generation of adventurers will also step up to that challenge. He hopes that they, too, will take God's Word across the wide oceans and distant lands — and even up into the frontiers of space.

Students at a public school in Managua, Nicaragua, after receiving Scriptures from the Bible Society...

Vickie and Lamar Vest giving outGod is Our Shelter and Strength at Ground Zero. (Photo...

Journeys - Something Good Every Day