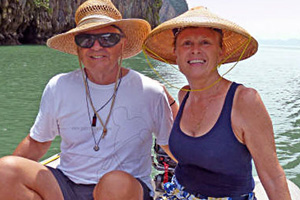 In 2002, Scott and Jean Adam ordered Bibles and thematic portions from American Bible Society. The address for this precious cargo was Venice, Calif. But the Bibles didn't stay there long. Within months, they were boarded on the Adams’ 58-foot boat, called Quest.

Scott was a filmmaker; Jean was a dentist. At a time when most of their friends were making plans for retirement, Scott and Jean were making plans to build God's kingdom worldwide. Supported by their local Catholic parish and numerous partners, they prayed for God's direction and a steady breeze. Then they set sail to share God's Word with the world.

They went to New Zealand, Mexico, El Salvador, Philippines, China, Malaysia and Thailand. At each location, they couple resourced local churches and individuals — anyone eager for the hope of the Bible.

“They had a rooted confidence in the authoritative power of God's Word,” said Craig Detweiler in Christianity Today magazine. “Their notion of traveling the world and spreading the Word of God connected to all that they understood about our calling in life.”

This calling continued until their most recent trip. Traveling from Mumbai, India, they were on a course charted for Oman. The couple has purposefully sailed in the company of a larger community of ships. But they got separated. Somali pirates then hijacked the Quest, killing the Adams and two other missionary companions.

In a moment, their lives were snuffed out. But their legacy lives on. Their loving sacrifice speaks powerfully to their devotion to God and his Word.

We at American Bible Society mourn their passing, and pray for their families and friends.

Helping the Least, the Lost, and the Lonely

Reaching the Unreachable with the Gospel, Changing Lives for Good