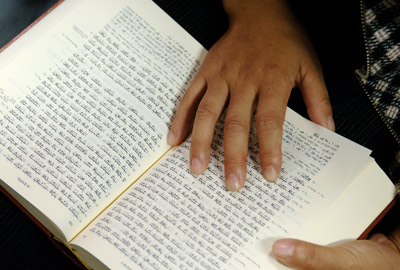 Scripture portions distributed to the homeless

One of the first translations of Scripture for the Chinese occurred in the 7th century. In 640 A.D., Nestorian (Persian) Christians first translated the gospel story for the people group they were trying to reach. But that was just the gospel story. In the early 16th century, the Jesuits reportedly started translating the Bible, but no trace of their efforts exists today. It wasn't until 300 years later that Robert Morrison, the first protestant missionary to China, completed work on a translation of the New Testament in 1813, and the full Bible in 1819.

Translation, in general, is difficult work. Even with present-day technology, the average full Bible translation project takes about 12 years and double that in the past. Translation for the Chinese, in particular, was even more complicated. Part of the difficulty early translators encountered was China's advanced society. Not only did the Chinese have established religions & mdash; such as Buddhism, Confucianism and Taoism — but those religions were already well-documented in literary and religious texts. Christianity entered China as a completely foreign religion.

“The translation landscape that the gospel message encountered when it reached India, China and other parts of Asia . . . was vastly different from what was encountered in many other parts of the world where there was no written tradition,” writes Philip Noss, author of A History of Bible Translation. “These elements may offer an explanation for the demise of the Nestorian movement in China, even though it was initially welcomes by the imperial court.”

In addition to multitudes of languages, translators encountered problems with the script used by the Chinese. That issue wasn't resolved until 1885, when Sam Pollard, a missionary from the United Kingdom, developed a script for the Miao language. The script he developed used the initial consonant of a syllable with the vowel placed above or below it, indicating the tone of the vowel. This script, now known as the Pollard script, allowed him to translate the New Testament for the Miao in 1917.

There were also other obstacles to overcome — significant issues like what to call God. Translators agreed that they wanted a term that connoted God's character, his history and deity. Some translators favored using an indigenous term for the divine. Others wanted to borrow a term from another language. The choice seemed to narrow down to the indigenous term “shen” or the borrowed word, “shangdi.” While shen was the true translation of the biblical God, it had no historic meaning because the Chinese had never had a monotheistic faith, says Noss. Shen actually referred to the highest class of Chinese gods.

Shangdi, on the other hand, was viewed — and used — as a proper name. Shangdi was known as the creator of all things. This debate continued with different versions of the Peking version of the Bible using different terms. In 1850, however, the American Bible Society opted to go with the word “shen.”

By the late 1800s, the earlier translations were proving difficult for people to comprehend. In 1890 working began on the Mandarin Union Version Bible using Mandarin — the language used across China and taught in schools. It was completed almost 30 years later in 1919.

In Mali, Josué Dembele feels "immense joy" because of his new Bible

Amidst Unemployment and Poverty, Children and Parents in Nicaragua Need Hope from His Word