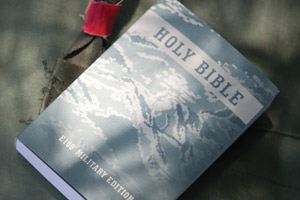 Suicide rates among active duty troops are alarmingly high. We believe that God’s Word can truly save lives as our military heroes struggle with the hidden wounds of war.

Too often, a soldier’s homecoming is not a glorious panoply of parades and accolades. Many veterans return home to face harsh realities of struggling families, unemployment and even homelessness. Battle wounds can be treated, even recognized with medals. But spiritual and emotional wounds, if left unaddressed, can linger for a lifetime.

News headlines and statistics tell the story of this urgent need.

In June, The New York Times reported that more active duty military personnel have died from committing suicide than in battle. Despite increased military efforts to provide counseling and other resources for our troops, the suicide rate continues to climb sharply — averaging approximately one suicide per day, according to recent statistics from The Associated Press.

How can we bring hope to those who are being pushed to the limit emotionally? Chaplain Bob Collins, director of chaplain ministries for the Christian Missionary Alliance, talks about chaplains’ need for well-designed materials their troops can relate to and use. ABS sent Bibles with the E100 Reading plan to Collins when his soldiers needed them, “and they were excellent,” he says. “The Scripture is living,” Collins says. “It becomes alive, it speaks to the heart.” 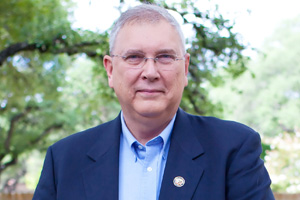 But it has to be in a format our troops can access and understand in order to begin the powerful work of transforming lives. The E100 military Bible facilitates that access, Collins says.

Collins uses the E100 military Bible with the chaplains he counsels. This E100 reading plan, developed specifically for the military, was exactly what their chaplains wanted, Collins says.

Recently, Collins was contacted by a chaplain serving hope and healing for homebound heroes in Iraq, seeking a better way to engage his soldiers in Bible study. The troops’ 12-hour shifts were making it difficult to assemble and study the Word together. Collins recommended the E100 Bible and reading plan, with questions sent out via email and study groups meeting online.

Equipping our military chaplains with the best resources means God’s Word can reach the hearts of our troops with a promise that will never let them down.

Although nearly 1.5 million Americans are in active duty military service, the veteran population totals more than 23 million. These men and women have sacrificed greatly in their service for our country. And yet, for too many of our nation’s veterans, that sacrifice is met with personal suffering.

Homelessness is a chronic issue among our nation’s veterans. According to the National Coalition for Homeless Veterans, on any given night, more than 300,000 veterans are living on the streets or in shelters in the United States. The Homeless Research Institute reports that veterans represent 26 percent of the homeless population. Perhaps even more startling is the report from the U.S. Department of Veterans Affairs that the number of homeless Vietnam-era veterans, male and female, is greater than the number of soldiers who died during the war.

How can we bring God’s message of hope and healing to these struggling heroes? 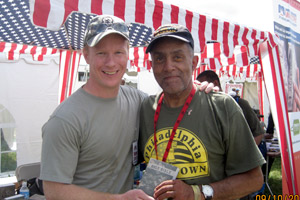 American Bible Society has the privilege of partnering with Stand Down, a community-based program that serves homeless veterans in cities across the country. ABS provides God Understands Scripture Portions that offer hope and encouragement from God’s Word. Jackie Vance, a volunteer who has been serving at Stand Down for years, uses God Understands to counsel homeless female veterans. She considers God Understands the best tool she has to show God’s love and provide hope to the women she serves.

ABS Partnership Manager Richard Braud got to see firsthand one of the ways that American Bible Society is engaged in this ministry. At 5:30 in the morning, the line of homeless veterans snaked its way down a chain-link fence surrounding the outskirts of Stand Down San Diego. “I wondered why [there were] so many, so early,” Braud says. And then “the reality of homelessness set in: Where else do all these veterans have to be? They have no job, no family, no bed to sleep in . . . and not much hope for something different.”

While Stand Down volunteers offered respite from the physical tolls of homelessness — veterans were given a place to shower, clean clothes, haircuts, and medical and dental services — Braud also witnessed how the spiritual needs of these men and women were being met through the efforts of American Bible Society.

Recalling a young man by the name of Carlos, Braud says, “When Carlos began to speak about his situation, where he’d been, his military service, it became obvious that he was still passionate about the fate of his fellow veterans.”

Yet Carlos, like so many veterans who struggle to deal with their emotional pain, had gotten trapped in the cycle of drug and alcohol addiction.

“His struggle with alcohol and drugs had been his undoing,” Braud says, “but he wanted something else, something better.” Carlos was convinced that money in his pocket would only find its way into a bottle or syringe, so he chose life on the streets — giving up his chance of being clean.

Braud began to share with Carlos about the one who makes us truly clean, the one who died for our sins — whether they’re the sins of addiction or the sins committed to feed that addiction. There is no sin too great for the love of God, Braud told Carlos.

“I could sense that Carlos knew things could be different, but I also knew he wasn’t ready to trade in his street life for the New Testament,” Braud says. So he introduced Carlos to a chaplain by the name of Garcia, who was volunteering at Stand Down — someone who “would welcome the chance to help Carlos regain some of his life and maybe a little of his pride.”

Chaplain Garcia began to share the Good News with Carlos, using the God Understands resource developed by ABS. Through the outreach at Stand Down, ABS gives Carlos, and many others like him, the “something better” they’re looking for. But beyond that, it gives them something perfect: the gift of life in Jesus Christ.

Healing the Wounds You Can’t See

There are physical injuries sustained in battle that must be healed. These are visible injuries that can be seen and understood in the treatment and healing stages. There are other wounds of war, the emotional ones, that are harder to see; they too must be treated and healed. American Bible Society seeks to serve those who are deployed and those who have returned home by addressing these unseen wounds with the healing balm of God’s Word.

Through partnerships with Operation Stand Down, relationships with chaplains, online Bible community groups, military youth ministries like Rezilient Life and

more, we are seeking to infuse the Good News into a story whose headlines have become discouraging and dire. Together, we can help change these statistics and bring hope and healing to our homebound heroes.

In the Middle East, suffering people are engaging God’s Word to heal the wounds of trauma.