Hope for Widows in India 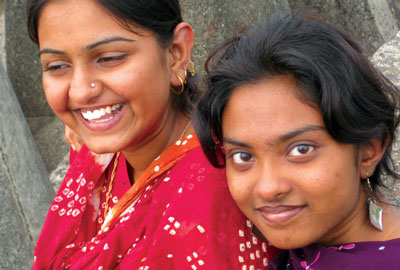 Priya and Neelam are two young Hindus. Some 47 percent of India's population of 1 billion-plus billion-plus is under the age of 20. Photo by Pascal Folly.

“My husband was an alcoholic,” says Jayabhai, a recently widowed Marathi woman in India. “My parents got me married when I turned 17. I could not complete my secondary school certificate, as they were in a hurry to marry me to my uncle’s son. They knew he was addicted to alcohol and yet got me married to him. Thus, my married life began with suffering that continued for five and a half years. Now, as a widow with two daughters, ages 5 and 3, to care for, I find myself even in more despair and hopelessness.”

According to ancient Hindu custom, when a man dies, his wife has three choices. She can throw herself on his funeral pyre in the sacrificial act of sati; she can marry her husband's younger brother (if his family is willing); or, she can spend her remaining days in isolation in an ashram designed for widows, where she shaves her head, wears mourning clothes and seeks to “atone” for her husband's death.

There are approximately 359,802,209 women in India, more than the entire population of the United States. Many of them are widowed each year, and the conditions in which they exist leave much to be desired. While the society has evolved over the years, Indian culture still retains many beliefs and practices of the past, particularly in the rural areas.

Many of these ritualistic practices are alive and well today. Although they may take other forms and have shed their old names, they ultimately reflect the brutality inflicted on so many women and girls around the globe through sex trafficking, acid attacks, bride burnings and mass rape. In India, women are easy targets for violence — particularly the uneducated — too often at the hands of their own family members.

Although women, particularly widows, have to contend with huge injustices, they are prone to suffer even worse injustices if they are among the poor majority of Indian society. Many organizations around the world, including the World Bank, other larger non-government organizations and faith-based organizations, are aware of the plight of these women. And, they believe that focusing on empowering women and girls is the most effective way to fight poverty, religious extremism and inequalities in society. 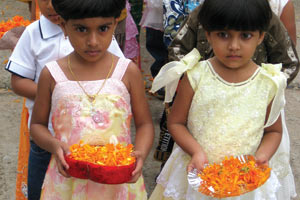 Children from the Saint Philomena Catholic Church in Mysore, India, during one celebration of the first communion. Photo by Pascal Folly.

One example of such empowerment is Mrs. Ruth, a Christian, who lives in Bangalore. Widowed with two boys, she was summarily abandoned by her Hindu family. Life was difficult and she eventually fell seriously ill. It seemed she had no hope of survival until she received a visit from a group of Christians who asked if she would allow them to pray for her in the name of Jesus Christ. She consented and they introduced her to the Scriptures. Ultimately, she was healed and joined their house church. In addition to regaining her health, Mrs. Ruth now exudes hope and self-confidence. While selling multicolored Pashmina shawls in a tourist shop, Mrs. Ruth was eager to share what God and his Word have done for her and her family. She credits the changes in her life to accepting Christ as the Lord of her life. She is thrilled to report that her oldest son is currently attending university, and her second son is finishing high school.

Less than 7 percent of the 1.2 billion Indian population is Christian, and with the increasing threat of persecution in different parts of the country, it is rare that one meets someone like Mrs. Ruth who is not afraid to express and share her faith openly in public. India is marked by a high degree of cultural pluralism. It has managed to preserve established traditions while absorbing new customs, traditions and ideas from other parts of the world. In turn, it has spread its cultural influence, primarily in South Asia, East Asia and the West. Jayabhai, the widow mentioned earlier, recently attended a seminar for widows, organized by the Bible Society of India in cooperation with several local churches.

While the conference was organized primarily for Christians, widows from other faiths were present as well. The age of the participants ranged from 23 to 78 years. During the seminar, the women were invited to reflect on the Scriptures. Jayabhai recounts her experience in her own words. “Recently an evangelist led me to the Lord and encouraged me to attend the seminar on ‘Hope for Widows.' As I was going through the seminar, I was challenged by God to surrender the bitterness that I had against my parents, my husband and my sister-in-law to him. I struggled with this issue for more than a week. I also fortunately was given a Bible in my language — Marathi. As I read through the crucifixion, death and resurrection of Christ, I was able to forgive my people.

“Luke 9.23 (GNT) says, ‘And he said to them all, ‘If you want to come with me, you must forget yourself, take up your cross everyday, and follow me.’ Now for me in my situation, this was taking up the cross and following the Lord.”“ 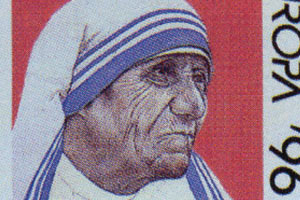 Postage stamps on display at the Bible Society of India's museum visually convey the expedition the Bible has made around the world. “Bible Exhibition” reads the sign that invites the curious off the street for a look inside to see them and much more. Upon entering, visitors are greeted by larger than life faces from history — including Abraham Lincoln, Billy Graham, Mother Teresa — and quotes about what the Bible means or meant to them.

The Rev. Sahu Surendra, curator and senior manager, says, “The word “exhibition' seems more intriguing to young people than some old, dusty museum.” Day to day, an average of 25 people come through, including schoolchildren, students and adults from Christian, Hindu and Muslim backgrounds. Rev. Sahu is always on hand for questions.

Passersby often stop to ask about the Bible and God, which Rev. Sahu graciously answers no matter where it leads. Some young people are in difficult situations as newly-marrieds, or starting out in their careers, and they want to talk to someone. Rev. Sahu feels it's his privilege, and God-given opportunity, to listen and share his life experience and the hope of Jesus with each one.

The William Carey Museum (named for the “Father of Modern Missions”) is located at the Bible Society of India in Bangalore.

Pray that the requests from the Bible Societies of Angola, Egypt, Republic of Georgia, Israel, Arabian Gulf States and Philippines will be answered

“Is there a God who cares?”

Giving orphans around the world hope from God’s Word!

A young boy in Jakarta receives a gift, including a children’s Bible. Photo courtesy...