Hope in the Belly of the Earth

God's Word to the Chilean Miners 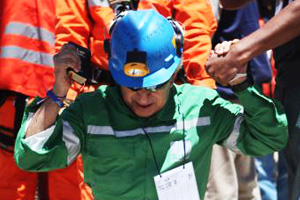 The man in the picture is holding the ABS Reina-Valera 1960 Bible translation that was given by the Bible Society of Chile to each miner through the communication tube used before being rescued.

On August 5, 2010, 33 Chilean miners began the most difficult and frightening trial of their lives. When a sudden rock fall trapped the workers close to 2,300 feet below the surface, they embarked on a 69-day ordeal that would test their physical and spiritual stamina to the limits. For days these miners lived in fear that they would never again make contact with the outside world. Long days in the dark and limited food supplies were all they had ahead of them. But, even in the midst of intense isolation and fear, these men did not give up hope. Working diligently to keep their morale up, the miners broke into separate task forces to keep their “refuge” clean, explore and document the surrounding caves and to prevent further rock fall. One important task was given to José Henríquez: to look after the spiritual well-being of the miners and to organize daily prayer times. The miners entered into a routine of daily devotion and dedication to serving God.

On August 23, voice contact was made with the men through a borehole rescue workers drilled from the surface. Supplies such as video cameras, food and water were sent down the shaft to aid them in their survival efforts. Another important staple, the Bible, was sent down the shaft at the request of the miners. This Bible was American Bible Society's Reina-Valera 1960 translation, which was provided by the Bible Society of Chile. Through the communication tube came the strength and hope only found in the Word of God. Through daily reading of the Scriptures and prayer, the miners gained the will and hope to live.

Finally, after 69 grueling days below the surface, aid workers successfully rescued all 33 miners. Photographs show workers, clasping the Bible tightly in their hands, crying out to God in praise and adoration for saving them and delivering them back to their loved ones. One of the rescued miners, Carlos Mamani, had written on the front of the uniform used to carry him through the escape duct: “Thank you Lord,” and on his back was written verse 4 of Psalm 95, which begins: “He rules over the whole earth, from the deepest caves . . .” The Word of God sustained the hearts and minds of these miners and gave them the hope in a hopeless situation.

Healing Heart Wounds in Little Ones