ABS ministers to the young, the sick and the poor 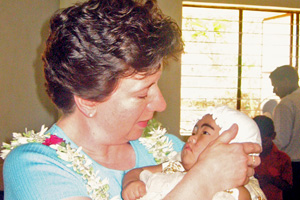 Julia Oliver cradles “Hannah”, an infant who was abandoned at the front gate of one of India's HIV/AIDS orphanages

In the United States, people who abuse, neglect or abandon children face serious legal repercussions. But in India—where children account for nearly 40 percent of the country's entire population—it's another story.

The poorer parts of India are home to some of the world's largest numbers of orphans and street children. But even the children who aren't destitute still endure an extremely poor educational system, rampant disease and a social system that caters solely to the rich. The children of India need spiritual guidance, education and—most of all—they need to know they're loved and valued.

In April, American Bible Society went to India to join with its partners the Bible Society of India and Samaritan's Purse, an international Christian outreach and worldwide relief organization. By distributing children's Bibles and gift boxes, members of ABS brought relief and God's Word to India's children in Kolkata (formerly Calcutta) and Bangalore, two of India's most populated cities.

For the first part of the trip, ABS delivered new children's Bibles to students at Good Shepherd Mission School and Immanuel Open Door Fellowship Church in Kolkata. The Bibles were given to the children who completed Samaritan's Purse's discipleship program—a 12-lesson course created to introduce them to Jesus Christ.

The Bibles, which are written in the students' native tongue, benefit not only the children, but also the entire family. Many people in India are either illiterate or have poor reading skills. But after seeing the children's Bibles—with their beautiful pictorial illustrations—many adult family members come to know the Lord.


In working with Samaritan's Purse, ABS staff also helped distribute donor-prepared shoebox gift packages to children with volunteers from SEED, a learning center that reaches out to the children in the Kolkata slums. Each gift box contained toys and small items of clothing.

The children in this area live in makeshift houses surrounded by garbage. To add to their daily trials, the government routinely bulldozes their settlements. So just the idea of receiving a “gift” is foreign to them. But when a child who has been running barefoot for most of his life receives something as simple as a pair of flip-flops, the light that comes to his eyes is nearly indescribable.

The same can be said about the toys. “Many of these children have nothing,” says Julia Oliver, ABS chief financial officer and executive vice president. “[They didn't] know what to do with the toys until we actually showed them.”

Many of these children may be so used to spending their time scavenging for food or finding shelter that just the idea of something “fun” might never occur to them. But all children, whether rich or poor, know the joy of play. And Oliver confirms this. “Once they understood that this was just meant for their own enjoyment, for ‘play,' and that it was now theirs, they were thrilled.”

Jim Luntzel, international director, Operations Christmas Child-USA, explained to the children that there is nothing we can do to earn Christ's love. Drawing a parallel, he also said there was nothing the children could have done to earn the gift boxes. They were freely given, just as Christ's love is freely given. 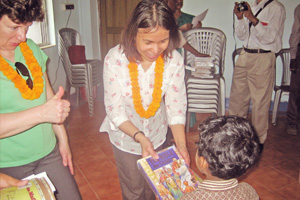 Julia Oliver (left) and Joy Varnay (right) enthusiastically congratulate an Indian boy for completion of Samaritan's Purse discipleship program and give him an illustrated children's Bible.


On the final leg of the trip, ABS staff and members of the Bible Society of India visited and supplied Bibles for women and children in an orphanage in Bangalore. This orphanage was a specific kind of outreach: one-third of the 500 women and children housed here are HIV/AIDS infected or affected.

This place, in particular, struck Oliver. The children with HIV, many of whom were taken away from their families, are thin and sick. This is a sad reflection of a society that devalues the young, the sick and the poor. Yet, this place is a haven of Christ's compassion. The pastor who runs the orphanage risks government retaliation, yet continues to minister to the women and children there.

“He's doing everything he can to raise money for medications,” says Oliver. “He is giving these women and children purpose to their lives. Nobody else in their caste or families is willing to do that.”

The orphanage, in fact, has a reputation for being the hands and feet of Christ. In January, an infant was abandoned at the orphanage's front gate. The staff named the child “Hannah” and have been taking care of her ever since. It's unknown whether Hannah has HIV/AIDS as the test cannot be performed accurately until the child is 18 months old. Whether she has the virus will have no bearing on the love and comfort she will receive here, which is yet another reflection of Christ's love.

While visiting the Bible Society of India offices and offering morning reflection, Oliver spoke about Acts of the Apostles, namely that it offers encouragement to the Bible cause in India.

Just as Paul had a special ministry to spread the Good News to the Gentiles, ABS will continue to support discipleship of its Christian brothers and sisters in India, who are a small minority in a land dominated by the Hindu majority. “I have placed you here as a light for the Gentiles. You are to take the saving power of God to people everywhere on earth.” (Acts 13.47, CEV).

A blind man reads Scripture from a Bible Portion in Braille. The Bible Society of...

“Let the Children Come To Me”