In China, one woman overcome adverse circumstances to learn and study God’s Word 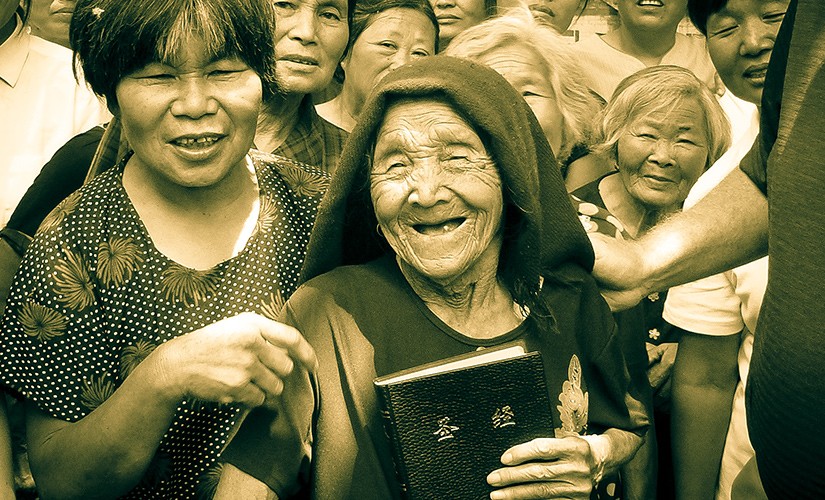 While standing in the front of her church’s sanctuary, Liu couldn’t help but flash an ear-to-ear grin. Beside her, a team of pastors—invited by the Chinese church—handed out Bibles to her fellow church members. She watched as men, women and children received a Bible, bowed, and began reading the pages inside.

For Liu, this day marked a momentous occasion. Approaching her 97th birthday, she had yet to read—or even hold—her own Bible. And then a pastor named Timothy handed her a brand-new copy of God’s Word, a gift made possible by American Bible Society’s generous financial partners.

Once Liu had received her Bible, Timothy paused to take a photo with her. He spoke with Liu briefly before delivering a Bible to the remaining members of the church. But as he met with the congregation, Timothy couldn’t stop thinking of Liu and her wide smile. So he returned to her side at the end of the event, intent on hearing her life story. Liu agreed to share it with him.

Nearly 50 years ago, a family friend approached Liu and asked if she would join her in prayer. Though Liu had never prayed before—and though open practice of Christianity in China was punishable during this time—Liu bowed her head. After praying, her friend opened a Bible and began reading Scripture. The experience moved Liu.

“I believe in Jesus,” Liu responded, after hearing her friend read the Gospel. “I want to be a Christian.”

Liu’s friend warned her of the possible danger ahead—of the persecution, of the need for secrecy, of the fear that may arise. But Liu wanted to follow Jesus anyway. So, in hopes of learning more, she began meeting with the five Christians in her village on a regular basis. During their gatherings—often held in the dark of the night—an 80-year-old woman with a rare, handwritten Bible sang hymns and read Scripture aloud.

As she met with her fellow Christians, Liu remembers dreaming of a day when she could hold, read and cherish a brand-new copy of the Bible.

Now late in her 90s, Liu’s dream has come true. After decades of listening to others read God’s Word, she can encounter Scripture with her own eyes, on her own terms.

“It is the most valuable item in my home,” Liu says. “I treasure my Bible.”