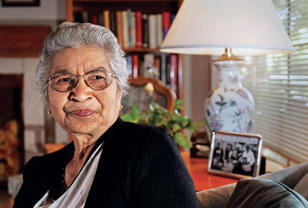 Lotus Harris was adopted as a baby by a Christian missionary in India. Today, she helps orphaned children in her home country. Photo by Gary Fong

She was only days old when her parents abandoned her — an all-too-frequent fate of baby girls in India. It was during the monsoon season, a time when disease, scorpions and many other dangers made a tiny life even more precarious. But little Serojini (“Lotus” in English) encountered the first of many miracles that would follow: A Christian missionary found her.

She was taken to a nearby mission hospital and, after a few days, to an orphanage. There, the wet nurse caring for her took to numbing the fussy baby with opium. Again, by God's grace, the abuse was discovered in time to avoid permanent harm.

An American missionary, Gertrude Harris, decided to rear Lotus as her own child. Her missionary colleagues in India did not approve, because Miss Harris was going against the prevailing cultural norm in the 1920s that there be strict segregation between Americans and natives of India. Deciding to buck that tradition was costly — Miss Harris' mission board denied her child support. Yet Lotus was sent to a mission boarding school and later to a Christian college, with the support of Miss Harris' sister, Irene Kilpatric. Aunt Irene paid for the girl's education from ninth grade through her master's degree in social work.

While on furlough in 1939-40, Harris took Lotus to the U.S. and enrolled her at Berkeley High School. The girl's time there was formative, largely because one of the teachers whom Lotus met, Miss Topping, introduced her to the idea of sponsoring needy children.

When Lotus settled in California, she followed the good example of Miss Topping and began sponsoring orphans herself. Since 1939, she has only added more. (She currently sponsors 10.) “Most are from my home area of India. I speak their language and don't have to work through a translator.” Yet she can relate to the children on more than a verbal communication level; she understands them as well.

“You can't reach for the soul before the body is healed,” she explains. “The Bible Society is concerned with both. It's a hands-on ministry.”