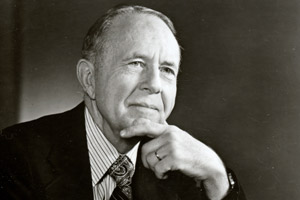 Eugene Albert Nida 1914-2011
American Bible Society mourns the passing of Eugene A. Nida, the distinguished linguist and Bible translator who introduced, developed and promoted the innovation of thought-for-thought translation. Beginning in 1943 and for more than 50 years, Dr. Nida was the leader of the translation program of American Bible Society and subsequently the intellectual leader of the global translations program of the United Bible Societies. the method he implemented, known as “dynamic” or “functional equivalence,” along with his active encouragement of mother-tongue translators, brought about a revolution in the field of Bible translation in the second half of 20th century. American Bible Society's Good News Translation of the Bible, completed in 1976, was the first English language publication using this new method. The resulting impact on the growth and development of the Church, especially in the developing world, continues to be felt as millions of people in hundreds of languages around the world gain access to the Bible in their heart languages because of Nida's innovative method and far-sighted scholarship. Dr. Nida is survived by his wife, Dr. Elena Fernandez-Miranda of Brussels, Belgium.

Our Father
Oliver Curwood Collins
Given By Mr. and Mrs. Dennis J. Collins

Philip Gensheimer Jr.
Given By Mr. and Mrs. Marc Siegel and family

My Mother
Ruth Anne Kelly
Given By Dorijean M. Kelly

My Mother
Caroline L. Reefer
Given By Joyce Reefer Deren

Honor the memory of a loved one by helping to provide Bibles to people who don't yet have them. Memorials of $500 or more for one individual or family unit will be published in the American Bible Society Record. For further details about the memorial process, please write to: Donor Relations, American Bible Society, 1865 Broadway, New York, NY 10023.