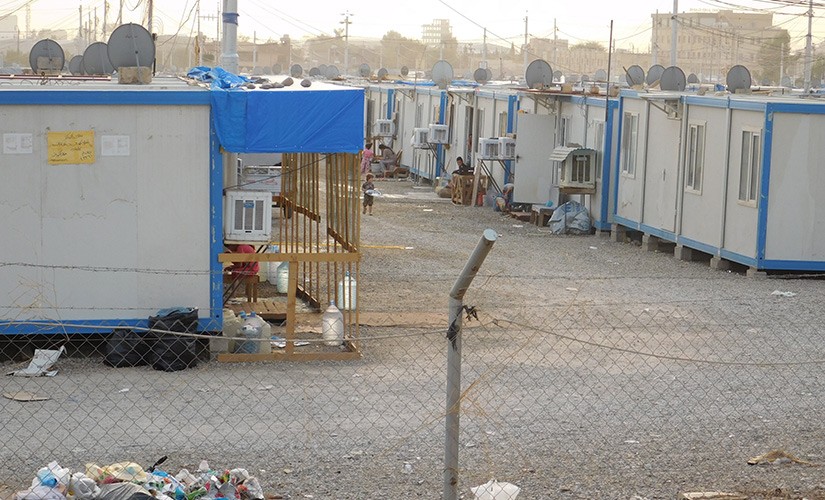 When American Bible Society launched its Bible-based trauma healing program in the Middle East, the first issue to capture my heart was the exploitation and abuse of women at the hands of cruel and deviant men, especially within the Islamic State. Perhaps it’s because I’ve seen so many hurting women, especially in Africa, find reconciliation and forgiveness by claiming the promises of Scripture for themselves.

But when I visited Iraq at the end of 2015, God showed me something new. I had never stopped to wonder what it was like for the husbands and fathers of these women to endure the knowledge that they were rendered helpless—completely unable to protect their daughters from evil. In Iraq, I came face to face with many brokenhearted men who had no control over the fate of the beloved women in their lives. One of the men I remember most vividly is Rahim.*

Rahim lives in a tiny fiberglass crate. He invited me into his makeshift home for tea; he wanted to tell me his story. Seated on thin cushions on the floor, he told me that his wife and three daughters had been captured by ISIS and sold into slavery. His youngest daughter is only six. As he shared, Rahim’s agony and desperation stirred me to the core. He was alone and helpless, visibly traumatized. “Even if I had the $5,000 each needed to ransom them,” he wailed, “where would I find them?”

I couldn’t comprehend what horrors Rahim must be feeling. Listening to him, I thought of my father and my husband. How would they respond if my daughters and I were kidnapped and sold as slaves? The thought is unimaginable.

Although we live a world apart, Rahim is my brother. His wife and daughters are my sisters. This suffering family vividly reminded me of the urgent need for Bible-based trauma healing in the Middle East. Sharing the restoration narrative of the gospel with people whose lives are so wounded is a daunting, desperately needed task.

Because we serve a God who understands suffering and works all things together for good, we persevere, refusing to let cynicism and anger win the day. We will bring his Word to the traumatized and let the glorious words of Scripture soothe and restore. Obeying the great commission of Jesus, we continue to go into the world with God’s Word in hand— hard places included.

*Names have been changed to protect the identity of our brothers and sisters in the Middle East.

Pray for Puerto Rico to Exchange Pain for Hope

Bible-based trauma healing programs are launching in the southwest U.S.