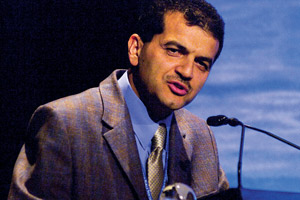 “I will be coming alongside ABS teams to invite American Christians to make critical investments for seeing God's purposes for the Middle East come true,” said Labib Madanat. (Photo by Matt Steinruck.)

Labib Madanat has been tapped to work with American Bible Society to help develop and sharpen ABS's role in Bible mission in the Middle East. He said, “I will be coming alongside ABS teams to invite American Christians to make critical investments for seeing God's purposes for the Middle East come true.”

Labib was born to Jordanian parents, ministers in Old City, Jerusalem with the Christian and Missionary Alliance Church. In 1977, his family returned to live in Jordan. As a graduate of Mosul University in Iraq, Labib was a firsthand witness to the country's war with Iran at the time. The many scenes of bloodshed broke his heart and stirred in him a growing burden for the Muslim people.

After graduation, he received a Master's degree in Soils and Irrigation from Jordan University in Amman. The continued war in the Gulf gave him a strong desire to serve the Lord.

After receiving an invitation to serve as a lay pastor in the same church his father served 30 years previously, Labib found himself, once again, living in Jerusalem. This time, however, he lived in the Jewish part of town where he experienced the Jewish people as his neighbors and not his enemies. Labib learned Hebrew, practicing it with the soldiers and sharing his faith. He discovered that the Lord was giving him His love for his new neighbors. These experiences have uniquely shaped and equipped Labib to fervently and passionately serve the Lord at the Israeli and Palestinian Bible Societies.

Join us in praying through the words Psalm 91.

One woman in Oman sees her husband transform from selfish addict to selfless provider.