Most Americans Own a Bible, So Why Aren't They Reading It? 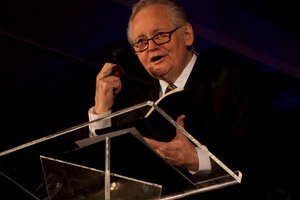 Recently, ABS President and CEO, Lamar Vest contributed to Fox News, writing on the state of the Bible in America. Below is an excerpt of his story:

It may surprise you to learn that America is decidedly pro-Bible. According to research commissioned by American Bible Society, Barna Research polled 2,000 Americans and discovered that nine out of 10 households own a Bible. A full 86 percent of people surveyed indicated that they consider the Bible to be sacred or holy. That's the good news.

But this positive view of the Bible and high rate of Bible ownership in America begs a question: what are Americans doing with all these Bibles? To put it another way, is the Bible simply sitting on our shelves or is it being read? And what difference does it make in our society if we're not actually reading the Bible?

To look at popular depictions of American society—a jaded, faithless people too sophisticated for belief in God—it would seem there is a decided disconnect between what we say we believe about the Bible and how it impacts—or doesn't impact—our lives.

More than half of the people surveyed as part of the American Bible Society study reported that they had an average knowledge of the Bible, while nearly a quarter of U.S. adults considered themselves quite knowledgeable on the topic. Two-thirds of adults correctly identified what “3” means in John 3:16 (chapter), indicating a working knowledge of the Bible’s basic construction. Seven out of 10 responding described the Bible as the inspired Word of God.

But are people were overestimating their connection with the Bible? After all, if people were reading their Bible on a consistent basis, wouldn't the world look a little better?

Pray With Us for United Bible Societies’ Day of Prayer

This Independence Day, consider a lesson from America’s founding: how to speak about the Bible lovingly with skeptics.