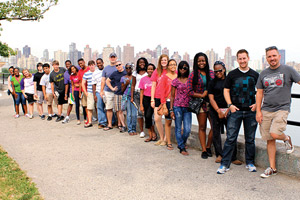 In July, nearly 130 youth from seven churches across the United States met at Bible House in New York City to participate in an urban ministry experience. ABS partnered with the Church of God (CoG) for this project, which is part of CoG's City Vision initiative.

Under the supervision of ABS's Tonya Butts, senior manager of Urban Alliances, these students learned practical ways to engage Scripture. Participants were given Scripture samples and then encouraged to engage with God's Word daily via E100 reading planners and ABS’s Scripture-based journeys and tools.

At the end of training, the students visited the Bowery Mission where they distributed 500 Bibles to the homeless using funds they raised in their communities.

Dr. Vest was presented with an award to commemorate 25 years of ministry partnership with LCR. The award also commemorated ABS's publishing of the RVR 1960, which has become the most popular Spanish Scripture for the last 52 years. Through the RVR 1960, more than 10 million lives have been impacted for Jesus Christ.

The United States is home to 1.4 million Portuguese-speaking Brazilians, and until recently, there were only 30,000 Brazilian Portuguese Bibles to go around, most priced around$50 each. The Bible Society of Brazil is helping ABS provide Bibles to every Brazilian who needs one. They have given access to their organization's top 50 Bible resources, now available on Bibles.com.

This strong collaborating support from national Bible societies undergirds the success and authenticity of the effort to reach the Brazilian diaspora with the Word. “Folks come here for a better life, and when the reality of the American system hits, it often leads to depression, isolation and nostalgia for their home country,” says Enid Almanzar, director of ABS's Multi-Language Ministry Programs. The Brazilian Ministry team is already networking with Brazilian Consulates to provide Brazilian Portuguese Bibles for each Brazilian prisoner, hospital patient and public school student across the country.

Considered “Neo-Aramaic,” the Modern Syrian language is spoken by many members of the Assyrian Diaspora who live mainly in Europe (Germany and Sweden) and North America. Many also reside in Australia.

This effort was made possible by the passion and generosity of ABS Board Member Nadia Cavner, who worked tirelessly with the ACOE Bishop Mar Awa Royel, Bishop of California, and ABS's Multi-Language Ministries to have 10,000 Syrian Modern Language Bibles printed and delivered to the ACOE dioceses in California and Chicago. These Bibles have also been printed and delivered to congregations in Canada, Sweden, Australia, Western Asia and Iraq.

The Church of the Nazarene, in partnership with American Bible Society, has launched a three- year, denomination-wide Scripture engagement program called Engage the Word. This program is helping 800,000 members of the Church of the Nazarene delve deeply into Scripture using ABS resources, such as the E100® Journey. This effort is part of the Uncover the WordTM campaign, which mobilizes leaders of churches, thought and culture to advance Bible engagement.

In the first year of this partnership, nearly 100,000 people participated in Engage the Word. This program has enriched and activated church members by empowering them to intentionally participate in daily Scripture engagement, says Woodie Stevens, global director of Sunday School and Adult Ministries at the Church of the Nazarene. “It is equipping followers of Jesus to engage his Word every day as a way of life.”

American Bible Society played a key role in encouraging meaningful Bible engagement at the Global Leadership summit in August with its partner, Willow Creek Community Church, in Barrington, Ill. More than 70,000 ministry and Christ-centered community leaders from all over the United States attended this summit, either in person or via satellite. The goal of the summit was to teach leaders to effectively engage their congregations with God's Word.

Lead Where You Are, a Bible study suite, was ABS's main Scripture offering at the summit. Lead Where You Are not only incorporates a Scripture journey that encourages leaders to grow personally, but it also supports them by providing sermon notes as they engage their congregations in God's Word.

As our nation celebrates the arrival of an international religious leader, heed the call of Pope Francis to cherish God’s Word in your life.

A painting presented to American Bible Society by Wycliffe to commemorate the 500th Bible translation...

Offering comfort from God's Word across the United States