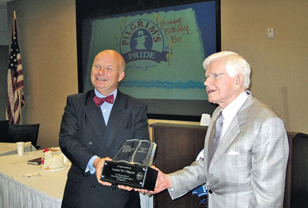 The Fermi Project is a think tank that looks for ways to engage modern culture with a biblical message. The American Bible Society was a sponsor of the organization's Q conference in New York City last April, which empowered church leaders to take their place in “future culture.”

Over three days, 25 presenters covered a range of creative and conceptual topics. Journalists including Michael Luo of the New York Times and Christian thinkers such as Gabe Lyons asked church leaders to examine their role as culture shapers and offered ways to heighten their awareness and challenge their creativity.

The 2009 Q conference will take place in Austin.

His company, Pilgrim's Pride Corporation, grew from a single feed store in Pittsburg, Texas to a Fortune 500 company. Through the years of honoring God, Pilgrim used the Good News Translation in his outreach as a businessman.

At the award presentation, he thanked God for the honor of allowing him to share Scripture through his work. “When I was a young boy, I promised him [God] that if I ever amounted to anything, I would give him the credit,” he said, “and I'm still committed to that promise.”

In April, ABS once again played a part in the eclectic Gospel Music Association (GMA) Dove Awards in Nashville. Testimonies that were filmed at last year's gathering by ABS were presented in a touching anthology, Scriptures from the Heart.

A few months later, music artists gathered once again at Estes Park in the Colorado Rocky Mountains. GMA's “Music in the Rockies,” a week of workshops and performances, was sponsored by ABS, GMA and Compassion International. ABS presented a Scripture Song award for music based on verses from the Bible. The prize included a track on a recording to be released by a major record label.

When the painter Marc Chagall was commissioned to illustrate the Bible in 1930, no one could have anticipated the extraordinary work that would follow. The modernist painter melded Hasidism, Eastern Orthodoxy and Western Christianity into a dramatically rich and personally significant visual expression of biblical stories. Chagall visited Palestine for the original sketches. His work was interrupted by Hitler's rise to power and was completed in 1956. See the results at the Museum of Biblical Art at the American Bible Society in New York City, beginning October 6.

The best-selling artist of all time leaves a lasting legacy for the Bible.

Making the Soul Strong and Free

A woman at Cameron County Jail in Brownsville, Texas, stands at her cell door, waiting...

Hurricane Sandy left a path of destruction as it moved along the East Coast. In...