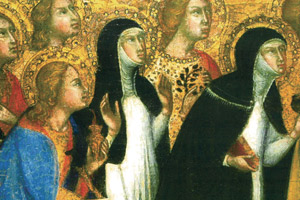 A detail of Seven Saints in Adoration of the Magi, c. 1375-1385. Tempera and gold leaf on panel. Courtesy of SBSAE di Siena e Grossato.

Through its advocacy initiative, American Bible Society is engaging moviegoers with a Scripture-based conversation guide on the newly released film, Blue Like Jazz. This movie tells the story of one person's search to discover God — a journey that involves doubt, insecurity, bad behavior, questioning and an honest look at what it takes to have faith of one's own. The conversation guide is for personal or small group use. Use it to spark discussion about the movie's key themes.

American Bible Society knows that God's Word has the power to change lives. By engaging with the Scriptures daily, people can move toward a fresh discovery of God and his Word. In the process, they personally transform into the likeness of Christ and positively impact culture. This is the mission of the Bible Society's Uncover the Word™ initiative, a national movement of people who are committing to the daily practice of Scripture engagement.

In November 2011, ABS launched this initiative at a summit in Florida with more than 300 people in attendance. Since then, numerous churches and organizations have joined the movement to share the power of God's Word with their congregations. Following are highlights of their efforts.

Willow Creek. The second largest and one of the most influential churches in the United States invited ABS to its first Bible engagement fair in South Barrington, Ill. Nearly 20,000 Willow members were introduced to various Scripture offerings from ABS, including the e100™ reading plan. This Bible reading plan takes readers through 50 short passages from the Old Testament and 50 from the New Testament. Members from Willow Creek also viewed ABS's array of digital resources, such as the Scripture-based Journeys.

Saddleback Church. Led by Pastor Rick Warren, Saddleback Church in Southern California has joined with ABS in providing resources to help fuel the Uncover movement, including its 40 Days in the Word. This teaching series is designed to help people become “doers of the Word” through daily devotionals, small group guides and community outreach programs.

The New York City Leadership Center. More than 250 churches in New York City have signed up for a 40-day journey through Nehemiah called Brick by Brick. An additional 110 Spanish-speaking churches, totaling more than 50,000 people, are using Brick by Brick resources in Spanish.

National Church of the Nazarene. Headquartered in Kansas City, Mo., the Nazarene Church has introduced a three-year, congregational scripture reading plan, The Red Thread of Redemption. Some 100,000 people have participated, and 85 percent are engaging God's Word daily as a result.

To China With Love

Joe McCormick of Columbia, Tenn., is no stranger to American Bible Society. He and his late wife have generously given to the Bible Society since 1995. McCormick also has been a Bible-A-Month® partner. Now, he is going to see first-hand the power of God's Word in action. In October, he will be going on a Bible distribution trip to China as a volunteer delegate with ABS through the Bible-A-Month program. McCormick is a retired professor who has traveled to 26 countries. Visiting China will be a first for him.

The Museum of Biblical Art is reuniting three altarpiece panels by celebrated renaissance painter Bartolo di Fredi in the exhibit, “Adoration of the Magi” by Bartolo di Fredi: A Masterpiece Reconstructed.

The Adoration of the Magi by this Sienese master (c. 1330-1410) is considered by many to be among Bartolo's finest paintings. The three surviving panels of this altarpiece depict a tender visit of the Magi to the Christ Child, as well as Jesus's Crucifixion and the mourning it brings. The exhibit permits an in-depth study of this oft-depicted Christian narrative.

It will be on view through Sept. 9 at American Bible Society's headquarters on Broadway and 61st Street.

2012 State of the Bible in America

How much do Americans value the spiritual truths as written in the Holy Scriptures? According to a 2012 study commissioned by American Bible Society, half of the survey respondents hold the spiritual truths of the Bible to be on par with the Koran and Book of Mormon. On whether people read the Bible to be closer to God, only 55 percent say they do, down 9 percent from 64 percent in 2011. Another surprising finding showed that 54 percent are unable to correctly identify the first five books of the Bible. The survey also showed that younger adults are less likely to perceive the Bible as relevant and useful compared to older adults.

Read the full report at ABSRecord.com/StateofBible

When Hope Means Everything

The God Understands™ series is designed to minister to people who are living with spiritual and emotional injuries and had been primarily used among active duty military and veterans. Northland and American Bible Society have partnered to bring this material to a wider, online audience.

Called Hope Changes Everything, this online, virtual pastoring series by Northland is designed to connect people with others who are struggling with the difficulties of addiction, grief, depression, anger and guilt. Using personal stories, the series links those vignettes with the hope found in the Scriptures.

“We want people to know there is strength and power found in God's Word,” says Margi McCombs, executive director of equipping for Northland. “Although they may be going through some very difficult things, such as grieving the loss of a child or loved one, they are not alone. God is there to offer strength and hope.” View the series at

The Armed Services Ministry of American Bible Society has launched the Women's e100, an individual, Scripture-based Journey for women whose husbands serve in the military. Through the e100, women can study God's Word side-by-side with their loved ones or over a distance if their husbands are deployed. Although the Women's e100 is an individual, Scripture-based Journey, a strong group component allows them to explore God's Word together.

Women can read or listen to the passages and answer reflection questions. Every five days, ABS sends an encouragement email to those faithfully taking the Journey. When someone completes 100 days, she receives an e100 charm to celebrate the accomplishment.

Eleven-year-old Idriss Segney reading an illustrated Bible donated by the Bible Society of Cameroon to...

John Eliot's Algonquin Bible, printed in 1663 for the Massachusetts Indians will be on...