Opening God’s Word for all the World 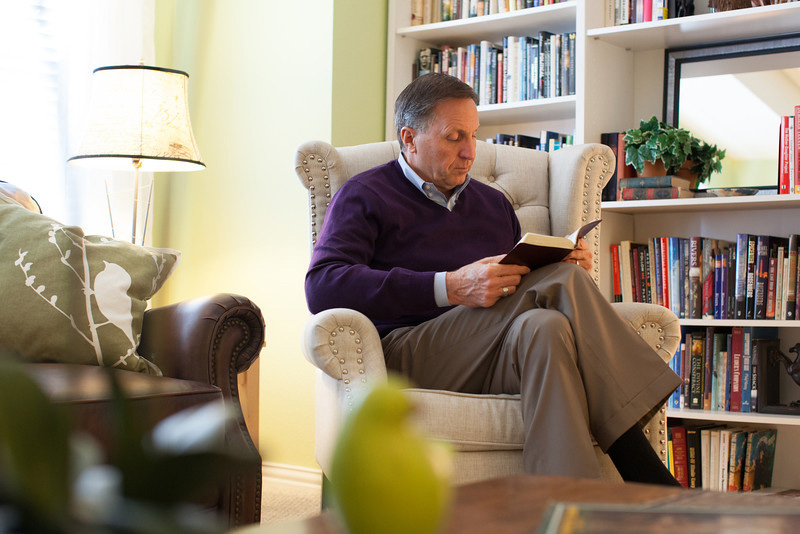 Dr. Roy Peterson, American Bible Society’s new president and CEO, says that the Scriptures are at the center of his heart, mind and soul.

“To me the Bible is life,” says Roy. “It’s God speaking in a personal relationship with me. Some people might make the mistake of thinking of the Bible as a just a book or something to check off, when in fact this book is alive! So it’s a daily part of my life and it’s my heart’s desire to see it become a daily part of people’s lives all around the world.”

But it wasn’t always that way. As a troubled teen, Roy didn’t know the Lord. “It was God’s Word and a couple of inmates at a Mexico prison that led me to Christ. The Holy Spirit took the Scriptures in my heart language, English, and spoke to my heart. I heard the Word of God so clearly. I knew I was forgiven for the sins in my life and that God was willing to give me a new beginning.”

That profound moment transformed Roy, who has spent the last 25 years working tirelessly to help bring the Bible’s message around the globe.

“Every man, woman and child should have the opportunity to have God speak to them in their heart language,” Roy says. “When God’s truth enters our hearts in the language we understand best, we grasp what he is saying to us. His Word becomes personal.”

Just as it did for Roy.

Roy began his career in private industry after marrying the love of his life, Rita. At the time, they were active in a small Baptist church in the suburbs of New York City.

They spent their first seven years as new followers of Christ deepening their understanding of Scripture. “We’d go week by week, verse by verse, through the Bible,” recalls Roy. “We were soaking it up like sponges. That deep expository teaching became our experience.” And their lifeline to growing in Christ.

As Roy continued forward in Fortune 100 management positions, it would take several years, many promotions and four children before God called Roy to share God’s Word as a full-time job. It started on a mission trip to Haiti, where Roy was struck by “the bondage of Bible poverty” there. French-language Bibles were available, but the people spoke Creole. God’s Word was inaccessible to them.

“Up to this time, no one had ever translated the Bible in Creole,” says Roy. “As I walked the streets of Haiti, I saw the spiritual and physical poverty. And I saw the darkness. The light of Christ hadn’t been brought to these people’s souls. I vowed to do whatever I could to get the Gospel out to those who didn’t have it.”

With that promise, God opened the door for Roy and Rita to begin serving with Wycliffe Bible Translators, a nonprofit organization that makes God’s Word accessible to all people in the language of their heart.

Moving with the Spirit

The position brought Roy and his family to Quito, Ecuador, and eventually to Guatemala City. The family stayed in South America for eight years until Roy was unexpectedly invited to serve president and CEO of Wycliffe USA from 1997 to 2003.

Roy loved his mission and had no intention of moving until God called him as president and CEO of The Seed Company, a Wycliffe organization that accelerates Scripture translation and impact for people without God’s Word. Roy served there from 2003 until now—when he will make his home at American Bible Society.

“I’m not that smart, but God is,” jokes Roy. “This is not about Roy making brilliant, meaningful decisions. It’s simply about God calling me here.”

Indeed, Roy has had a relationship with American Bible Society for nearly two decades through his work in Bible translation.

“American Bible Society’s scope of reach nationally and internationally is truly strategic,” says Roy. “ABS has a legacy of prayer, giving and influence on so many fronts. God has given ABS some tremendous gifts: faithful donors, passionate staff, top-tier partnerships and cutting edge technology.”

Roy envisions a great future for American Bible Society. He outlines two key areas of focus as he steps into this new role: growing Scripture engagement through the U.S. church and eliminating Bible poverty globally for the hundreds of millions who have never had one verse in their own language.

An exciting season is clearly ahead. Under Roy’s leadership, you can expect ABS to continue to focus its passion for accelerating God’s Word into strategic ministry that is changing lives all around the world—exposing nations to the hope of Jesus found in the pages of Scripture.

A new online campaign challenges Americans to consider what the Bible says about modern life.

Rev. James Hainley and his wife Sandy have invested in eternity through American Bible Society....