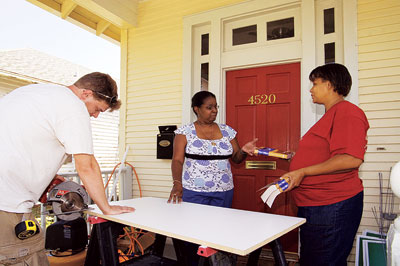 I was about to leave a restaurant in New Orleans when my waiter, Rick, complained about the lack of business. “This lunch hour was so lousy my pockets are empty,” he said.

I motioned Rick back to the table. “So times are tough?”

“Lunchtime used to be full of tourists and businesspeople, conventioneers,” he responded. “Now only three tables are taken in this huge place.” It was a full three years after Hurricane Katrina.

Rick had a two-story house that had suffered massive water damage. Even with a second job, he couldn’t afford to fix it. Times were tough.

Then brightening a bit, he told me that the most effective institutions in the city were the churches. After Katrina, it was church volunteers who were bussed in to help rebuild (pictured above), and who manned the Red Cross efforts.

Summing up his situation, Rick found strength where so many of his city did. “God and my church definitely keep me centered,” Rick said.

David Singer visited New Orleans to report on the area’s continued need for God’s Word. The American Bible Society had provided churches and ministries in New Orleans with more than 1.5 million Scriptures before the storms. Since Hurricanes Fay, Gustav, Hannah and Ike, more than 500,000 Scriptures have been given to Gulf Coast residents.

A Season of Renewal

Even when it feels like everything is falling apart, the Bible promises a perfect ending in Jesus