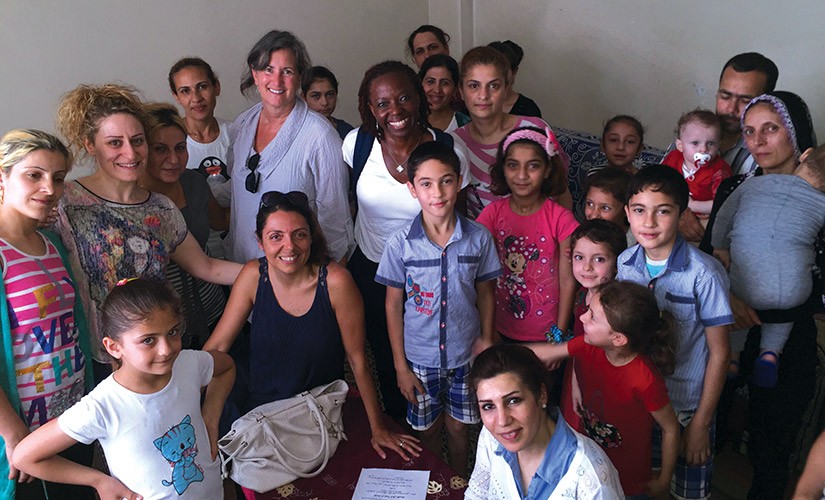 In early 2016, I had the privilege of visiting Syrian refugees in the Middle East. During my travels, I met countless families who had fled violent unrest in Syria for safer lives in Iraq, Lebanon and Turkey.

As I listened to the stories of wounded mothers, fathers, sons and daughters, I thanked God for allowing us to recently launch Bible-based trauma healing sessions in the Middle East. The ministry, which combines God’s Word with mental health best practices, will offer Syria’s trauma survivors a chance to share their grief and bring their pain to the cross of Jesus Christ for healing.

And the grief and pain among Syrian refugees is overwhelming. I saw it firsthand during my trip. Although I returned to the United States months ago, the faces of my Syrian brothers and sisters are still swimming through my head.

I remember Sayid*, an elderly man who fled Syria with his son. Now living in Turkey, the pair dreams of a stable life in Greece, but have encountered numerous setbacks.

First Sayid paid a man to take him and his son to Greece. But the man drugged Sayid and ran away with his money instead. Sayid and his son then jumped on a ferry headed for Greece, only to be apprehended by the police and brought back to Turkey. Later they boarded a boat that sailed toward Greece, only to dock back in Turkey.

I also remember Sara*, a mother of five from Syria. On Christmas Day, a soldier from ISIS tore through her village and opened gunfire on her neighbors. The gunman killed Sara’s husband and shot Sara in the arm. She fled to Turkey and united with three of her children, but was forced to leave behind two other children, both of whom are married, and could not leave Syria.

Although these stories are bleak, I have hope for Sayid, Sara and their fellow refugees. Ever since Bible-based trauma healing launched in the Great Lakes region of Africa, we’ve seen the power of God’s Word heal broken lives time and time again. Nothing is impossible for our God—not even among the Middle East’s most ravaged communities.

These refugees and their stories also reminded me of Christ, who was no stranger to rejection. During various parts of his life, he was unwelcome in his hometown and without a place to rest his head.

I’m praying that each Syrian refugee I met will learn to draw on the strength that Jesus offers through his resurrection. I pray that they will find freedom from their suffering by engaging with the hope-filled message of Scripture.

Thanks to your generous partnership, I can see the answer to my prayers unfolding in front of me. God’s Word is already bringing hope to the hopeless in the Middle East. Wounded people arrive at our trauma healing sessions with pain and heartache, but regularly leave having embraced the freedom found in God’s Word.

I want to thank you personally for linking arms with us—not just through your financial support, but also through your prayers. Please ask God to bless this ministry in the Middle East, that our weary brothers and sisters might drink deeply from the wellspring of his Word.

*Names have been changed to protect trauma healing beneficiaries.

Can you imagine being fined, imprisoned, beaten, or even killed—simply for owning a...

Thank God: Jesus Comforts a Boy who Lost His Father

Praying for children to experience peace through Bible-based trauma healing