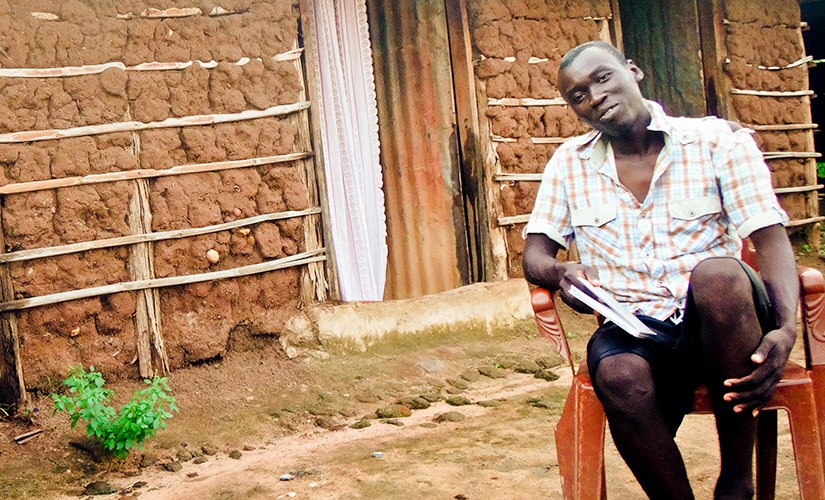 Five years ago, South Sudan fell into a devastating civil war that continues to this day. John and his family lived in a simple house made of mud and iron, and they kept close watch on the escalating violence. When they felt their lives were in danger, they fled their home in search of safety with only the clothes on their backs.

Tragically, the boat they were escaping on sank, killing 200 people. John survived. His wife and children did not.

John was devastated and lost. Though his wife had introduced him to Christianity, he began drinking out of despair. After losing everything and everyone, he didn’t know how he’d go on. He even considered taking his own life.

Thankfully, the Bible Society delivered Bibles to his refugee camp. Before, John only went to church on Christmas, spending his Sundays fishing or drinking. But after receiving the Bible and a second chance at life, John has accepted Jesus into his heart. He’s even forgiven the men responsible for demolishing his house and sinking the boat he was on when he lost his family.

“The Bible has changed my life and made me forgive those who caused misery to me,” John said. “It also made me realize that if I follow Christ, I will meet my family one day in heaven.” John is just one of the millions suffering from the effects of a five-year civil war in South Sudan that’s caused one of the world’s worst refugee crises.

Four million have been uprooted from homes, and two million have fled to neighboring countries. They are hungry, scared, and often homeless.

But even in the midst of South Sudan’s civil war and Africa’s worst refugee crisis, the Bible Society continues to provide God’s Word and healing to their traumatized people. This wouldn’t be possible without the support of American Bible Society’s financial partners.

“This Bible has saved my life,” John said. “I have seen the light.” We are grateful for friends like you who help bring the light and hope of God’s Word to people like John.

Despite Persecution an Algerian Girl Clings to Jesus

In a Bible of her own, Hamia discovers “the only way is Jesus.”

Bringing the Word of God to Africa with The JESUS Film

“This Bible has changed my life so much.”

Providing light and healing for refugees, even in the darkest pain.