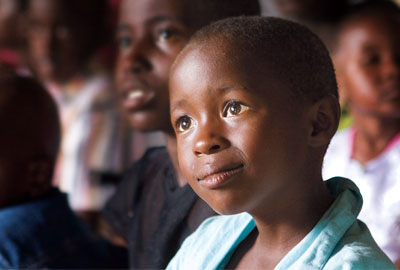 When my husband and I recently traveled to Rwanda and Burundi, we were prepared to enter a war-torn place where people were still recovering from the effects of violence and poverty. Instead, we found lush green fields, breathtaking Lake Tanganyika and, most of all, a gracious, vibrant people eager to serve as ambassadors of their countries and their Christian faith.

How had this extraordinary transformation taken place? The Bible Societies in both countries spoke of Christ as the Prince of Peace, the physician who was bringing new health to their land. People talked about a spiritual revival.

The unexplainable power of God’s grace has given these nations the strength to engage in the difficult and painful work of forgiveness and rebuilding. In a world that so desperately needs to experience the transforming love of Christ, the people of Rwanda and Burundi were our teachers.

Gitarama Prison is an unassuming brick structure in the rural hills of Rwanda, home to 7,400 prisoners. More than half of them are serving sentences related to the 1993 Rwandan genocide, a harrowing time when citizens — many of them Christians — committed unspeakable acts. No one in the country was unaffected.

Within the walls of Gitarama, God’s forgiveness and healing power are at work. There are many small churches in the prison, each with its own pastors and teachers. Louis , the leader of one of the Protestant Christian churches, explains that the Bible is a very important part of his life and healing. “The Bible gives me peace in my heart,” he says.

He finds comfort in the story of Abraham. Though his own story is much different from that of Abraham, Louis draws strength from God’s promise to bless the Hebrew patriarch. He explains that Abraham waited a long time to see fulfillment of God’s promise and that he himself must wait patiently as well. “The Bible helps me to be patient and to wait for God’s promise,” he says.

Scriptures provided by the Bible Society are essential tools for these church leaders. One says, “It is hard to preach and help others learn about God when you don’t have a Bible.”

Immaculé and François have been married for 23 years in Rwanda, but many of those years were filled with strife. In 1993, Immaculé became a Christian and had a new vision for her marriage. She tried to be a good wife in the eyes of God and says the Bible, especially Proverbs 31.10-31, gave her strength to keep going every day.

But François wanted nothing to do with Christianity. He explains, “People choose a way in life. I chose a way that was not good.” He could not keep a job and would often spend the little money they had on alcohol.

During this time François contracted HIV and through him, so did Immaculé. When she found out, she was devastated. In an act of desperation, she called her pastor. François agreed to meet with the pastor in the hope that he could solve their domestic problems by making Immaculé change her behavior. But the pastor explained that only Jesus could heal the wounds of their marriage. François’s heart was softened, and he made a commitment to follow Christ.

God’s Spirit quickly began to bear fruit in their marriage and their lives. They attended the Bible Societies’ Good Samaritan HIV/AIDS workshop in 2001, which taught them to “look for the people and the problems around you and help them.” When Immaculé and François realized that there were other couples in the same situation, they started a couple’s ministry in their church. This ministry led many couples to embrace the love of God in their marriages and live in a way that shares that love with others.

As François says, “All things can become good for those who believe in God.” 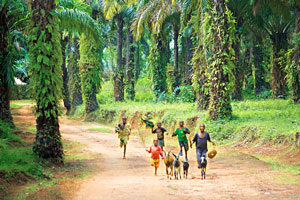 “The lush jungle near Gitega, Burundi has a rural population that is embracing the teachings of Jesus Christ.”
Photo by Drew Hood

Behind her radiant smile is a deep wisdom uncommon for her years. Shakera is 10 years old. She studies hard in school, especially math and science, because she wants to design and fly airplanes when she grows up. She says that she has seen God at work in her country, making the sick well again. She experienced this firsthand.

When Shakera was diagnosed with a potentially fatal stomach disease, her parents desperately looked for a cure, without success. As a last resort they took her to Kenya. She explains that they gave her medicine, and they also prayed for her. When asked if she knows anyone whom God has healed, she smiles and states with great confidence, “Me!”

Shakera attends Sunday School with 200 other children, where they read Scripture booklets provided by the Bible Society. There she learns that God loves little children and does miracles. She especially enjoys the story of David. “God can help you overcome the people who are stronger than you,” she says.

With an attitude of thankfulness for what she has seen God do in her own life, Shakera is a living testimony to God’s work in Rwanda.

To Heal the Sick

One surgeon is making a difference at Gitega Hospital, in a rural area in the heart of Burundi. Gitega is the only medical facility of its kind for many miles.

A year ago Dr. Etiene Bunzirigi began a prayer group. On Wednesday mornings this group prays for the sick. Etiene says, “We pray that the power of the Holy Spirit would cure the diseases that we can’t cure ourselves.” This prayer group is open to anyone at the hospital: Patients, family members, nurses and doctors frequently attend. The Gitega prayer group has grown to include a Bible study, led by Etiene, which uses materials provided by the Bible Society.

Etiene explains that many people who come to the hospital recognize their need for healing, both physically and spiritually. He tells his patients, “The power of God is real. God can transform and heal. We teach people how to read the Bible and how to trust it.” He says that people in the hospital are the most open to the Scripture’s ability to transform their lives. He has seen many people within the walls of Gitega Hospital put their faith in Christ.

While there is a small number of Bibles at the hospital, most patients leave without a Bible of their own. “Many people who come here are thirsty to read the Bible,” he says. “They beg us to give them one. But we do not have the [financial] means to give them all a Bible. We just don’t have enough.” His dream is that all the patients who are discharged from the hospital could be given a copy of God’s Word, the ultimate source of healing and transformation.

When Bill and Rita Bartlett talk about God, they can hardly contain themselves.Their excitement...

In this listening group in Getarer, Tanzania, men and women sit on opposite sides of...